Home / About Answers in Reason

About Answers in Reason

Our readers are usually those who like to think about and question everything. They are often atheists, but not always. Sometimes they are curious folks who are willing to broaden their horizons, and occasionally we get the odd angry fundamentalist.

We hope most of our readers are not the sort who are looking for confirmation bias, and will verify what we say in our articles with as many different sources as possible. As such, we try to provide many links within our articles from reputable scientific, medical and philosophical sources where possible, but we also encourage our visitors to keep on reading and questioning.

Science, unlike religion, will change its views based on new evidence. As such we are inclined to do the same. If one day it is proved that there is a God, then that will be one of our answers in reason. But with over 2,500 gods in the world, and not a shred of credible convincing evidence for any of them, we are not going to waste our time talking about them much.

We will, however, cover the various errors, contradictions, and evils in various holy books, and analyse the text to the best of our ability. That said, if we make a mistake or misquote or misunderstand a particular holy book, then please feel free to contact us too. We do not want to spread misinformation.

One thing that we hate about religion is that it divides people; even within each faith, there are further separations by denomination.

It similarly saddens us that the whole “atheist” title goes to further separate people from the rest of humanity. We would much rather people work together from a humanist point of view than segregate themselves by using their religion.

This is why I always feel a bit saddened by seeing atheist-only events going up. Whilst it is great to meet like-minded individuals, true growth comes from being challenged!

That said, we will attend an atheistic event if there is a good cause. For example, if it is against bigotry, the pseudo-scientific anti-vaxxers or someone like Aron Ra promoting science over creationism in Texas schools. 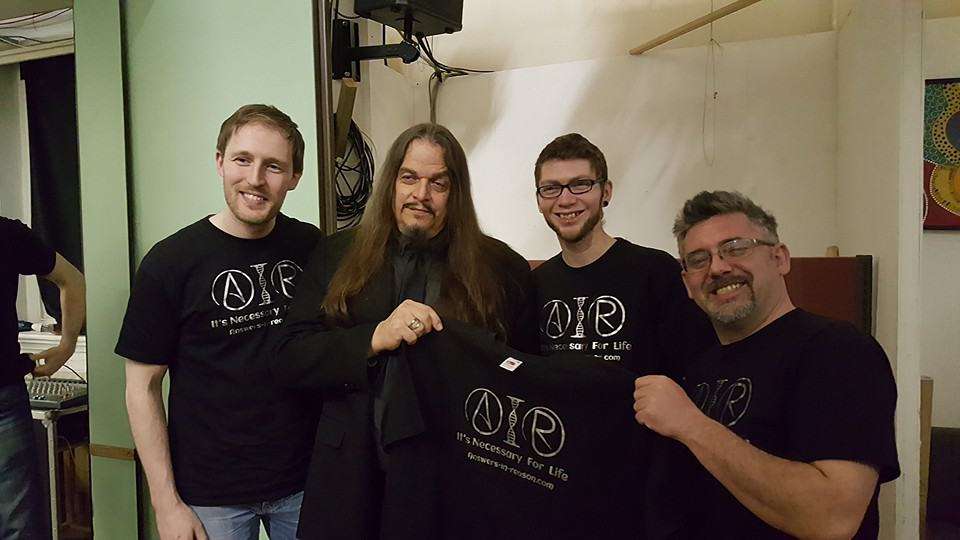 From left to right we have, Howie, Aron Ra, Kriss Pyke, and Alan T.

Equally, we will point out when someone like Ra makes an error like we did in In response to Ra’s ‘What is Atheism?’.

The History of Answers in Reason and its Authors

Where did we meet?

The team all met in various online debate groups on Facebook, as mentioned in Alan’s article: Internet Atheists, FB Debating groups, and their spin offs.

Between our philosophies and sense of humour, we added each other as “friends”.

Over time we got to know each other better, chatting ever more regularly, and eventually took the speech marks and italics off the term friends.

How did it happen?

It all happened rather fast and out of the blue. Kriss had a couple of articles on a site. The site went down. Davidian had a server that he used for a couple of blogs, and was looking for a new project. A few minutes were spent thinking of a name, which Kriss decided on. Davidian bought the domain, set up the site, and we dragged in Alan as another founder and got a few people to contribute to us.

Within weeks we had a couple of hundred followers, some of our articles already viewed thousands of times and here we are.

What are our Goals?

Above everything else, Answers in Reason and its authors are searching for truth. We want to spread truth and prevent people from making decisions based on hearsay, fallacious thinking, and tradition or accepted knowledge. We encourage critical thinking and rational/evidence-based decisions.

In fact, we also encourage atheists to be better themselves. Too many atheist folk spend their time condescending, patronising, making arguments from authority, and never really considering or looking into the topics they are spaking of.

What is an Atheist?

The first thing to remember about atheism is, the term is polysemus. In philosophy, the normative use is “The belief gods do not exist”, however more colloquial the definition is “disbelief, or lack of belief in God, gods or deities”. Some of us dislike the “lack of belief” definition of atheism, and are closer to the philosophical definition; “belief god(s) does not exist” (which is the same as “disbelief in gods”). The nuances in atheism’s definitions are discussed in more detail in this post. We also discuss how logic works in regards to propositions in this post.

Regardless of the strength of said disbelief (or non-belief); we do not believe in god(s).

Whether you use the philosophical or colloquial definition, it is still describing a position on a particular topic and says nothing more about the individual. Some atheists are very humanistic whereas others are incredibly selfish individuals. There is a particular pattern of negative behaviour among atheists that is known at ‘New Atheism‘ and there are many ‘Bad Atheist Arguments‘.

There is quite a strong correlation between intelligence and atheism, but being an atheist does not make one intelligent. I have also met some really stupid atheists, just as I have met some really smart theists. It is unfair to make statements like “atheists are smarter” or “atheists are more rational”. This is demonstrably false, and an irrational belief in an of itself. Correlation is not the same as causation, and there is more than religion involved playing a part in these studies. Affluence, education, family units etc all play a part as well.

Firstly there is the term Gnostic and Agnostic which is now used as a prefix to describe both theism and atheism. This is not exactly its normative use but is the common colloquialism. Whilst not accepted academically folks today use them to describe the knowledge element of their belief/disbelief.

The perception is a gnostic (theist/atheist) is 100% epistemically certain (or knows) their view is correct. These types can rarely be reasoned with.
An agnostic is, not necessarily doubtful, but at least more open to the possibility (because they don’t know).

An agnostic atheist is possibly a more open and honest approach to atheism and goes along the lines of:

“There is no evidence for God’s existence. There are clear historical, moral, and scientific errors and contradictions in <enter holy book here>. As such, I do not believe in any gods, but I am open to the fact I could be wrong. It’s not that there definitely is no god, just that there isn’t evidence for one”

The gnostic atheist would be more along the lines of:

“There is no evidence for God’s existence. There are clear historical, moral, and scientific errors & contradictions in <enter holy book here>. There has been no evidence for <x> years of this religions existence. For there still to be no evidence we can safely assume the absence of evidence is evidence of absence and therefore there aren’t any gods”

Using these terms and modern definitions, it is also important to note that someone can be a gnostic atheist and an agnostic atheist at the same time. With over 2,500 different god claims, without even addressing the tens of thousands of denominational variances, it is possible to be Gnostic about 1 or more of those, but Agnostic about others. (This could sometimes be referred to a being locally atheist but globally agnostic within philosophy, yet holding the belief gods do not exist is not the same as saying you know gods do not exist.)

Huxley proposed the epistemic principle “We should not claim to believe or know that which we have no scientific evidence for” – this, over time, has become known as the psychological state of suspending judgement. You lack belief in the proposition both being true and false. It is known by some as a second-order belief. A belief about a belief (you believe you lack belief).

A belief is a positive attitude towards a proposition, something we accept as true or think most probable etc.
It says NOTHING about the strength of belief, certainty, or if you KNOW it is true or not.

Having a belief is not making a definitive claim about reality.

So, we can have one of 3 attitudes towards P

Bp (and therefore ¬B¬p) – Belief God Exists, and therefor Not Belief (aka lack of belief) God Does Not Exist – Theist

¬Bp & ¬B¬p – No belief in either God Existing or God Not Existing aka Unbelief in P, or lacking belief in both positions – Agnostic 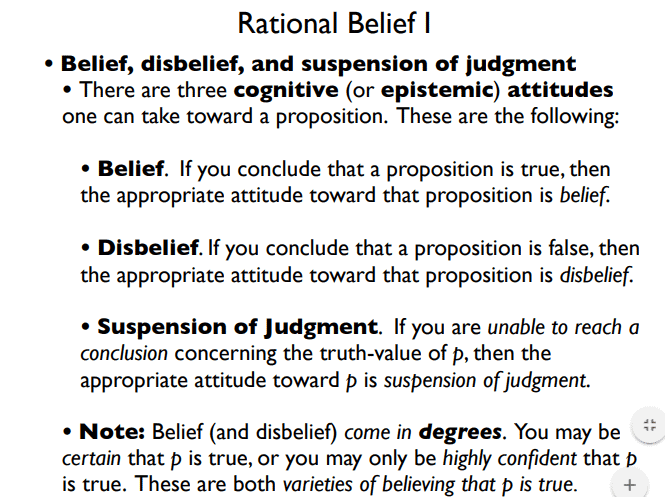 This is one of the reasons the modern “lack belief in gods” definition doesn’t really work as it does not provide an epistemological answer, largely only supplies one’s psychological state, requires further investigation, and basically ends up being the same as the classical Agnostic position.

However, common use defines language, so on the internet and in America, the modern use of modifiers is what most people know and understand, even if not the most logical.

As such, there is utility to the colloquial definition, and we should accept that is how folks use it, but equally, there is nothing wrong with discussing these terms.

Humans are tribal by nature. As much as we may try and transcend the tribe and carve out our own bit of individuality, you always end up attracting others to the group. Whilst atheists do encourage individual thought, there are those that choose to not think about things too much and go with the flow. They put their trust in those more intelligent than them, which is probably safer than having completely baseless faith. However, we would encourage everyone to question everything. This includes the atheists you might look up to be they the 4 horsemen, Dawkins, the ACA, the AA or any other group.

Having expanded our team of authors we felt it best to give them their own page.

CLICK HERE TO LEARN ABOUT THE AUTHORS OF AIR.

There are a few different ways you can get hold of us.

The fastest way is to send a message to our Facebook page: https://www.facebook.com/answersinreason

Other options include using the comments on our site, email and Twitter.

Special thanks to our contributors and editors:

And also to those who have helped improve our posts and articles in the editorial sense such as Matthew Wilson and Andy Nickols.