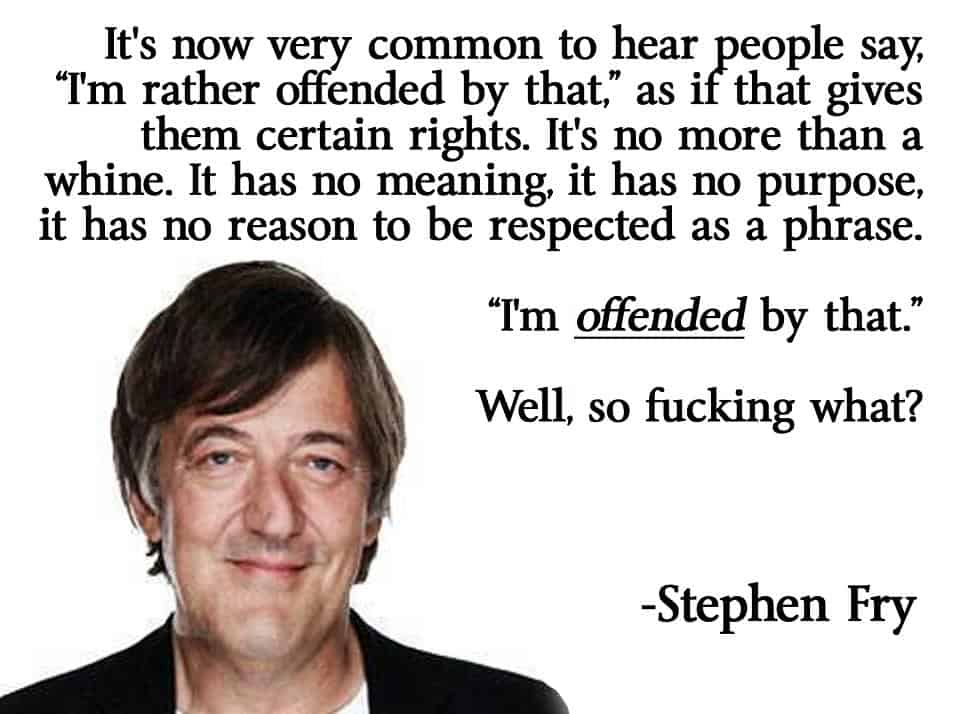 Bigotry definitions and false bigotry claims has been covered by an article by Kriss: What Is Bigotry? The Difference Between What Makes Us A Person, And What Makes Us A Human.

I also covered the difference between words/prayers and actions in my article: Sorry I’ll pray for you.

Assuming you have an understanding of these articles I shall not bore you with repeated information and shall talk about some of the results of bigotry, and in fact just not being perfectly PC.

The avoidance of forms of expression or action that are perceived to exclude, marginalize, or insult groups of people who are socially disadvantaged or discriminated against.

It is true. You find people so nervous about what they say that they often just don’t say anything. This is not a constructive or productive way to behave. There is plenty of truth out there, some about ourselves. We may not like it, but it is still worth hearing.

Perhaps part of this is what we were taught as kids. “If you can’t say something nice, don’t say anything at all.”

I’ve always had an issue with this, as the only way I have ever improved is from critique. Whether it is my personal critique of myself, or others of me. There is nothing wrong with admitting you are not good enough at something. Especially if you are ambitious, take control of what you can change, and work to improve it. Do you think top athletes are there because they are happy with their first attempt? Or do they critique themselves, work on their flaws, and push themselves to become better?

I’d much rather people were open, honest, and blunt than fake, deceitful and “nice”.

Annoyance or resentment brought about by a perceived insult to or disregard for oneself.


In fact in modern culture we take this one step further. We get offended by things on other people’s behalf. “You can’t say that, it’s offensive to x group”. What I don’t understand is why people get offended on others behalf, whilst the group in question may see no issue with it.

Above is a short video by Steve Hughes about people being offended.

If you liked the short version check the full version here: https://www.youtube.com/watch?v=fHMoDt3nSHs

The key element I find most people who are offended miss is “Intent”.

Is your intent to oppress/harm someone or a group with your actions or words?

I’ll give you an example:

As a child growing up in Croydon we use to use the term “gay” in a derogatory way. At this time we had no real understanding of sexuality, or that gay meant “homosexual”. – to us exclaiming “That’s so gay” pretty much meant the same as “That’s rubbish” or “that’s no good”.

As I grew up I became more aware of its meaning and became more sensitive to others. I rarely use that term but I do sometimes slip up.

I have dropped it around homosexual friends, and promptly apologised. The reaction in most instances has been, “Don’t worry about it, I grew up saying that’s so gay too”. Some even still use the term.

Intent. My friends know I am not a bigot. They know I don’t take issue with people because of their sexual preference or race.

The one time I have been chastised for the use of gay in a derogatory way was a straight white American female who “had gay friends” that “would probably find it offensive”.

It’s interesting how words evolve over time too. Gay used to mean happy and colourful. It then meant homosexual. And to us as kids it just meant “rubbish”. Southpark did a great episode called “The F Word” which highlights this beautifully.

That said; you can see how someone might get confused if you use language that is percieved to be bigoted, not know your intent/definition, and as such be offended. That is why a certain understanding and acceptance of political correctness is useful in general social situations.

I asked a friend, Dave H: “Why do people feel the need to get offended on others behalf? Can people not speak up for themselves? Do people like having a moan so much they get involved in everyone else’s business just to do it?”

Great questions, and yes, intent has a lot to do with it.

The best way to answer your question is with an example.

Let’s say you unintentionally tread on my foot. I yell out “ouch!”. 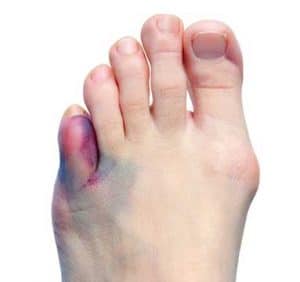 I would hope you’d just say “Sorry mate” and try not to do it again.

If you looked at me and said “I didn’t mean it. So you don’t have to feel pain” I’d think that was very odd.

If you looked at me and said, “I get sick and tired of people who have sensitive toes and whop moan too much” I’d think you were a wack job. Haha.

And yes, there may be a few folks who have sensitive toes who leap wherever you come within a few feet of them. 😉

Of course there would be some acceptance from you that I am clumsy and might step on your toes again. (Alluding to my accidently using gay in a derogatory way). But I would also try not to, and I would be sorry each time haha.

I’m sure eventually we would work out exactly how far to stand from each other to avoid it in future.

However to use your example with the woman above.

The equivalence there is me stepping on your toes, you not reacting and her saying “ouch” on your behalf.

We digressed at that point but that analogy we came up with, whilst a bit of a false equivalence, stuck with me.

It later occoured to me that the woman above was actually closer to me taking a step, her saying, “ouch” and complaining because I might step on someone’s foot.

We can never truly know another’s intent. And people use things like “I was just kidding”, “It was a Joke” or “I didn’t mean offence” as if they are some magical get out clause. That isn’t strength, that’s being gutless.

The simple answer is to ASK THEM. Rather than immediately getting offended and angry simply ask, “do you really think that?”

That simple question can save a lot of arguments and can prevent you from getting unnecessarily angry and stressed.

People who get offended often feel that it give them certain rights. It’s like the fact that they don’t like something means that no one else should do it.

I have no problem with people not liking something, but expecting others to agree with and act on their opinion is ridiculous.

If you don’t like homosexuals getting married, don’t marry a homosexual.

If you don’t like people celebrating Kwanza, don’t celebrate it.

Christians were in uproar about the show “Lucifer” because they made him “too sexy” and “tempting”.

Regardless of one’s religious view-point, isn’t Lucifer supposed to tempt people? That aside, why try to get the show taken off air just because you don’t like it?

Unfortunately you can see this behaviour elsewhere. For some reason the lowest common denominator always seems to win.

Google recently released an update for their messaging app “Hangouts” that removed merged conversations because “Users found it confusing.”

Merged conversations was a brilliant way of having both your SMS and Hangouts messages in the same message, with a simple drop down to switch between which you were using.

The option was off by default, and you had to manually join some of your contacts if their google and phone information was not linked.

This means that these users that “found it confusing” not only went in and turned on the merged functionality, but they then complained about it when they got stuck.

Rather than just turning off the function, they have kicked up enough fuss that google removed the feature completely.

This behaviour of appeasing the lowest common denominator is worrying for me. Instead of encouraging people to raise their game and use their minds we are lowering the bar.

If this continues we will end up with light switches that not only have the words on and off written on them, but come with instructions and warning labels.

I should note at this point that Google’s and any other business reasons for appealing to the LCD is sales driven rather than the matter at hand, but I felt it prudent to give an example of how the LCD is appeased in other situations. Unfortuanately the more we lower the bar, the less people have to think, and the lower the bar has to go.

The thing I think we should focus on where offence is concerned is harm. Does the thing you are offended about actually harm anyone?

If you are offended by people who victim blame rape victims, and are willing to stand up for their rights, then that is a good thing. Victim blaming causes harm and allows rapists to go free. This is not acceptable behaviour. We should fight against all forms of victim blaming. We should also fight against false accusations, but I degress.

The show Lucifer does no harm at all. “People might be attracted to Lucifer”. It is a TV show. Even if you are religious surely you know that this is an actor playing a part?

The Difference between Bigotry, Political Correctness and their Offence

Whilst bigotry is an intentional bias against someone based on one of many factors out of ones personal control, political correctness is intentionally not saying something in case someone might get offended.

There is a big difference between irrational hate, and being overly cautious with your wordsmithing.

People could be equally offended by bigotry or a lack of political correctness, but only one is definitely harmful. Only one is intentionally hateful. 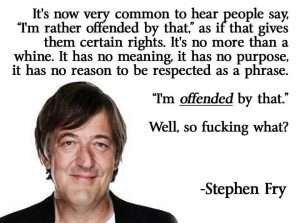 If we are to address everyone who is “offended” by something seriously, we will end up with nothing. Just because I don’t like boy bands doesn’t mean you can’t like them. I’ll just not listen to them. Just in the same way if you don’t like metal, drum and bass or one of the other genres I enjoy you can simply not listen to them too.

There is no reason to ban things we don’t like when they are not causing any harm to anyone.

If no harm is being caused, and people are not being intentionally offensive, then your being offended is nothing more than whining about something you don’t like.

Equally don’t expect to mouth off and use phrases like “no offence” or “I was just joking” and think that placates the situation. That’s just as bad as saying “I’m sorry” or “I’ll pray for you” but not taking any actions.