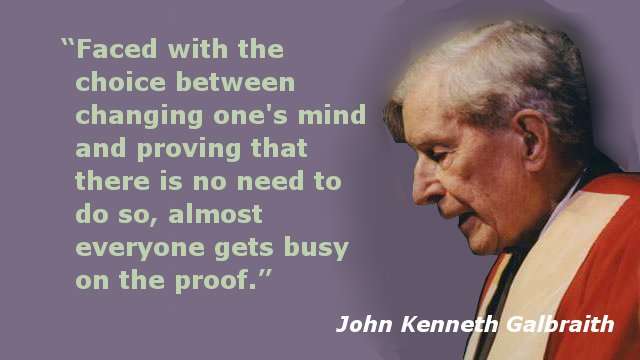 For those atheists that discuss and debate religion, we should ask ourselves what the purpose behind it is. Why do we do the things we do? For the Christian evangelist, or the Muslim performing Da’wah, this is a simple question to answer. They do it because they are attempting to spread their religion. They believe their way is the way, and their religion teaches them that they should be spreading the religion. What of the atheist though? We have no such doctrine, we have no doctrine at all. Yet it is common, especially in this modern era, to find atheists discussing and debating religion. So we should ask ourselves why we attempt to discuss religion with the believer. Is the purpose simply to mock those that do not think like us, or is the purpose something more?  Is the purpose to change minds?

It is common to find atheists in debate groups, especially amongst those that act like echo chambers for atheist thought, using the phrase ‘ridiculous beliefs deserve ridicule’. There are many who seem to be content to insult and mock the believer, because they hold the idea that the theist has ridiculous beliefs. What of the theist though? There are many who hold the idea that the atheist has ridiculous beliefs. We often see attempts from various theists to mock the non-believer, not just the atheist but those that hold a different religion. So does their belief that others hold ridiculous beliefs entitle them to ridicule those beliefs, as the statement implies? The atheists who hold to this idea justify their actions by claims of atheism being logical, reasonable and rational. Yet the believer holds that their beliefs are these things too. Each group believes that they are the ones with the correct beliefs, the rational beliefs, the logical beliefs. What does ridicule achieve though?

Ridiculing can be used to bully people into conformity of course. Is that all we as atheists want though, for those that do not believe to simply conform to our ideas? How does that make us any different from those believers that simply want us to conform to their ideas? If our goal is to attempt to promote rationality, and reason, and logic, then surely we want more than simple conformity? Surely we should want more than to simply look good, or look clever, amongst our peers and those that are in our in-group?

Unless those are our goals then of course we should want more. In order to achieve more though we must understand what it takes to change a person’s mind. We also must understand why it is people believe in religion, beyond memes such as ‘too stupid to understand science’. We need to understand why people believe their God exists, and their religion, beyond the simple answer of indoctrination. One of my colleages here at Answers In Reason presented an article in to the science of belief which you can read here at your own leisure. We already face an uphill battle when it comes to the believer changing their mind, especially in cases of religions like Islam, in which it is taught that it is perfect and beyond reproach, and that it cannot be wrong. If our goal is to change their minds then we must understand at least the bare minimum of what it takes to change a mind, and the approaches necessary in order to change a mind. In this article we will attempt to discuss some of the various approaches and ideas put forward about ‘changing someone’s mind’. So, what does it take to change a person’s mind?

An Interest in What is Being Said

The first step towards the acquisition of knowledge of course is an interest in the topic at hand. If we are not interested in the topic then we will rarely seek out the knowledge. Sometimes it is curiosity, other times it is necessity, but it is usually some kind of interest that begins our journey. The reason behind our interest is often a factor in what information we seek out, or what information we accept, as well. If we are simply interested in debunking an idea, often we will seek out that particular information. The same is true of the opposite as well, we will seek the information that supports the idea that we are interested in. However, interest is only the beginning of the journey. It is what leads us to begin our acquisition of information and knowledge, and not the deciding factor on where and who we get our information from.

A Little Bit of Respect

It is often respect that is a major contributing factor in who we listen to. For if we do not respect the person, or at the very least their grasp of the topic they are speaking on, then we will reject the information that they present us. We can often not respect the person giving us the information, but if we respect their authority on the subject then we will still listen to what that person has to say on the subject; even if we dismiss their opinions on other subjects. Showing us that respect has much to do with our ability to change another’s mind. Here is where the atheist faces something of a problem though. The knowledge we have is not something that most believers have a genuine interest in, most are not seeking to acquire knowledge of atheism but instead to convince the atheist that the position they hold is incorrect. They are seeking to convert, rather than be converted. They also do not have a respect for the average atheists authority on certain subjects. The authority that they respect as far as knowledge goes is their God, and their scriptures. Made even more difficult in cases such as Islam, in which it convinces the believer that the scripture cannot be wrong, and that the Muslim cannot be wrong if they are indeed following what is taught in the Qu’ran. It creates an almighty (pun intended!) bias in their thinking, one that is incredibly difficult to challenge.

It is not an impossible challenge though. What it means that what we must rely on is their respect for us as people, and as human beings. We could argue that it will never happen, this is true. After all, it is included in some scriptures that we are not to be respected. That we are only worthy of hell fire, that we are fools, and that the wise are the one’s that follow ‘the true religion’, which usually tends to be the one that the particular believer is a member of. However, this is not always the case. There are many that are willing to engage in dialogue and discussion, and there are many that treat those who believe differently with respect. So long as they are worthy of respect of course. They generally tend not to engage in discussion with those whose behaviour is bullying and insulting. They are indeed looking for reasonable discourse, just as many atheists are simply looking for reasonable discourse.

This is something that we should be using to our advantage. By creating and reinforcing slogans such as ‘ridiculous beliefs deserve ridicule’ we immediately alienate those we should be having reasonable discourse with. We earn no respect from those we should be seeking to gain the respect of when we lead with the idea that we will ridicule what they believe. Especially when we factor in some of the stereotypes and ideas that many believers already hold of the atheist. 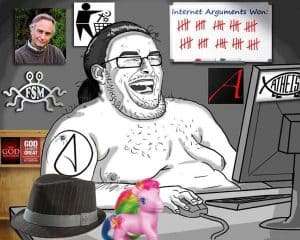 Stereotyping of the Atheist

When we enter into a conversation with many believers, the non-believer is already confronted by certain prejudices and stereotypes. Ideas such as the angry atheist, or that atheists are arrogant, or are atheists simply because we do not want to behave, and much more. Many atheists will have come across this in some form at some point in their lives, especially if they are active in discussion and debate. We are also seen as irrational by many believers, as they believe that the rational conclusion is that God exists and to believe otherwise is irrational. The Bible claims that those who do not believe in God are fools, and the Qu’ran promotes the idea that we are less than cattle (cite sources).

This means that even before entering into a conversation with many believers they have a particular image of us. An image designed to impact the amount of respect that the believer has on first contact. In order to overcome this we must show that these stereotypes do not hold weight, and that what they believe, what they have been taught to believe, is a falsehood. That we are not angry, and arrogant, and foolish, and immoral, and less than animals. That we are indeed reasonable and rational people, and we are good people.

“I will never respect religion”

There will be those who will reply that they will never respect religion, or religious beliefs, or believers. However, this is not the point being made here. The point is not that we must respect these things, but instead that one of the key conditions to getting someone to listen to you is that they must respect you enough to actually listen to what is being said. If they do not respect a person enough to listen to them, then there is little chance that person will have the opportunity to get them to question their beliefs, or listen to their criticisms of their belief, or to listen to reasons why they do not hold the same belief. Therefore if the goal is these things, then the approach used must be considered.

This is not to say that all believers are approachable, or will listen, or will ever respect anyone that does not believe the same thing as they do. For these people clearly exist, and the atheist active in discussion and debate will have come across these people on a regular basis. These people may or may not be unreachable, however it should be considered that even the most ardent of believers in particular ideologies have changed their mind when they have come across people who had certain extant qualities that made them consider their beliefs.

However, to approach all believers as if they hold this mindset would be an error in judgement. For there are those that are willing to have polite discussions. There are also those that criticise others for similar reasons the atheist does, such as the exclusion and harassment of the LGBT+ community and the like. Just as the atheist community is diverse, and is made up of many different ideas and beliefs, so to is the theist community. Some are not of the Abrahamic faiths. These things should all be considered in our approach to discussion and debate and criticism. Just as we atheists are unfairly lumped together, or faulty conclusions are made based on faulty premises, we must also not make the same the mistake of theists.

If our goal is to get people to consider their beliefs carefully, or to understand our criticisms of their beliefs, or to listen to our questions, then our approach needs to be considered by each and every one of us. Our goals too need to be considered; and if our goal is the things that are mentioned here then one of the main factors in even getting close to them is that we must have a minimum amount of respect from those we are in discussion with, enough respect to actually get them to listen to us.