Sin-onyms; The sinful use of synonyms – CMT: Volume 9 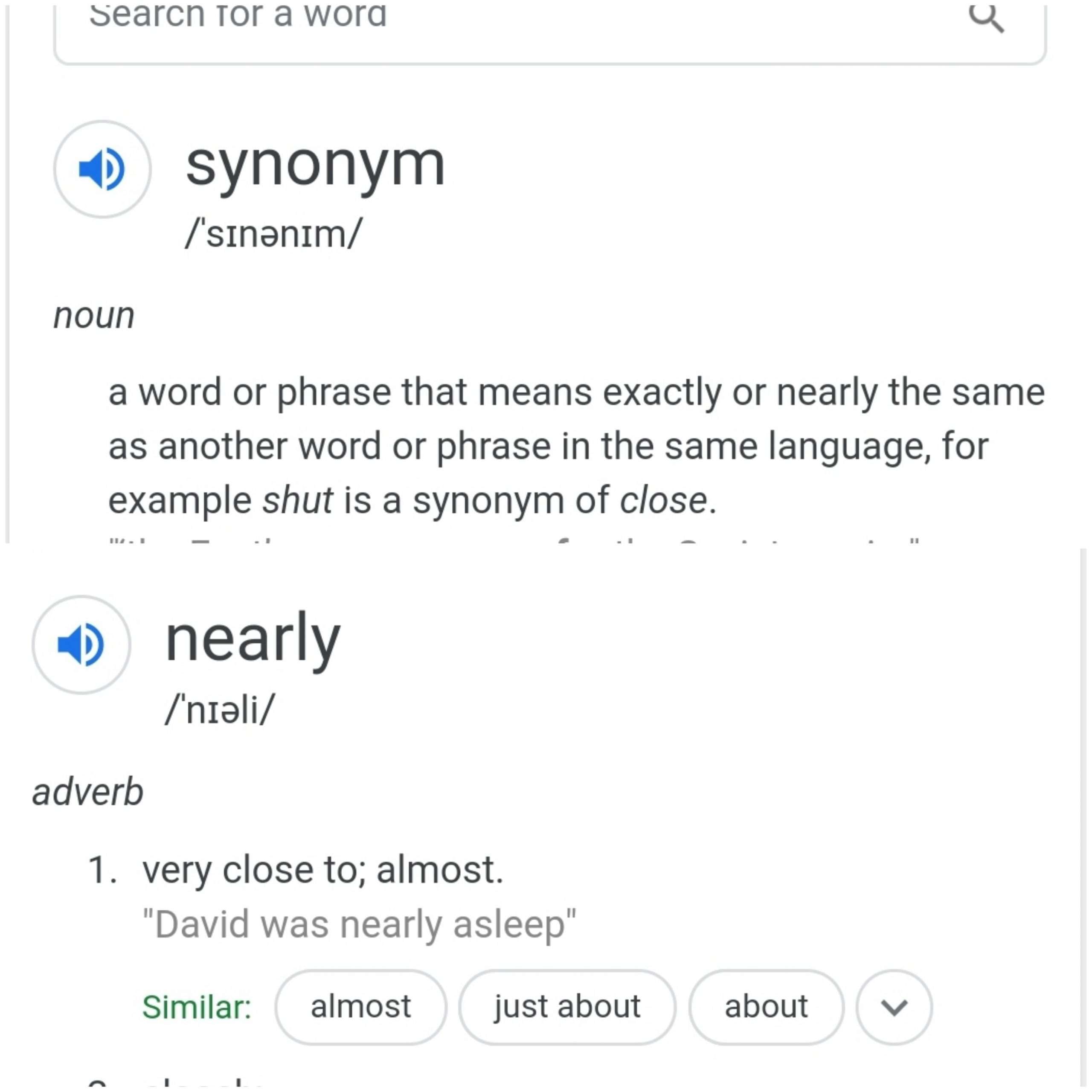 What we should note from this is the word NEARLY. Nearly does not mean the same, but close to.

This can cause problems when people conflate normative uses of words with various other definitions which in turn can lead to a domino effect of words being synonymously defined in an almost exponential array of errors.

However, lacking belief is a synonym for disbelief, even though it only describes half of what your position in regard to X is. Lack is also unclear as to how much you lack but is usually thought in absolute terms.

Added to this, lacking is seemingly used in 2 ways. One is ‘I don’t believe x’ and the other is ‘I am without/absent of belief in x’.

Without or Absent of Belief

A synonym for lacking is without, and a synonym for without is absent. All of a sudden when have our definition being quite different.

When you are absent of belief in X, you have no belief position what so ever in regards to X. The second I make a statement about anything you will start to form an opinion about it, even if that is you believe don’t have enough information to hold a belief that it is either true or false. It is virtually impossible for a conscious being to be absent of belief once given any information about something unless there is something wrong with their cognitive process.

What we can see here is how a particular word, or phrase can go through a number of synonymous iterations and end up meaning something different to its original use.

When we consider Atheism is defined using these words and is normatively defined as the belief god(s) don’t exist (or disbelief in the existence of gods).

If we use Google search for a definition (and don’t take the time to look at a few different dictionaries like Cambridge, OED, etc) and accept the first one that comes up, you’ll find the description as ‘disbelief or lack of belief in God or gods’

So here, we can see they are separating these two words. Disbelief OR lack of belief. We can infer this shows an understanding that the two words are different enough to be addressed separately. However, we still do not know how they are really defining these terms, disbelief, I don’t believe, and lack of belief can mean quite different things.

Yet the same dictionary then says they are also synonyms.

So why do you think this is? Dictionaries are descriptive. They describe how words are being used. When a word is used in a particular way enough it gets added to the dictionary. Different countries, even those that speak English, will have different definitions and spellings of words. You can expect an English dictionary to have the more commonly used English definitions. You can expect an internet dictionary to have the more commonly used internet definitions. The point here is, it is most likely, pending rationality, that these words are both being understood by many on the internet as ‘I don’t believe’ rather than disbelief being the positive, ‘I believe not’ and lack of belief being understood as an absence of belief.

When we use the synonyms we can end up saying anything absent of belief is an atheist, which is just ridiculous.

Another one for disbelief is non-belief/unbelief. Non-belief is when you don’t believe in something, but not necessarily think the opposite is true. This is known as the suspense of judgement.

So, for the example of the proposition “God Exists”, disbelief would mean we believe God does not exist, and therefore lack belief(don’t believe) in Gods existence.
Comparatively, being in a state of non-belief or unbelief about gods existence would mean that you don’t believe he exists but you also don’t believe he does not exist. essentially you do not hold the belief it is true or false, or to rephrase it, you believe it is neither true and false, at least at this time until you have enough information to convince you one way or the other.

However, as non-belief is don’t believe which is seen as lacking belief, we end up in the same pattern we do above, and again end up with non-belief = absent of belief.

Below is an image which accurately describes how any rational person ought to apply these terms in regards to a proposition.

Another term for that ‘suspension of judgement’ position is being agnostic.

I don’t know about you, but I am kind of sick of talking about beliefs for a second. Actually, after days of conversation about it on twitter, I might need more than a second. So let’s get on to one of my favourite topics, morality.

There are three words in morality that are similar enough to be confused. Amoral, Unmoral and Nonmoral.

Amoral, when regarding a behaviour, is one that is neither good nor bad, however, the context we are going to discuss here, is a description of the agent.

Amoral, when discussing a moral agent, is someone who is not concerned if their actions are good or bad.

Unmoral is someone not concerned or influenced by morality. (sounds similar to amoral, but it is not.) A baby, for example, is unmoral, because they have the potential to be a moral agent, even if they do not yet possess the cognitive abilities to be one yet. At best, they are a subjectivist.

Nonmoral is anything not holding or manifesting moral principles. So this includes your forks, rocks, fences, toilets etc.

These all sound very similar, and I get that you *could* say, “well, rocks are not concerned if their actions are good or bad”, but the difference here is they don’t have the ability to be concerned. Kind of similar to the ‘rocks don’t have a belief in gods’ right? Again we see a relationship between having and lacking as I discussed in Ontology and the things we lack…

The A prefix is something commonly misunderstood. It can mean either NOT or WITHOUT and sometimes it can be hard to know which.

Internet dictionaries often get this confused too, and sometimes folks use whichever works best to support their position. So what’s the difference?

The not is thought of as a negation. If we consider how terms like ‘Atheist’ come about, it is used as a negation of the theistic position.

Theism is commonly described as ‘the belief god exists’ – but this is not the psychological state of believing something, but the propositional content from this statement we take, the ‘God exists’.

Atheism is the negation of theism.

A common issue we see if the a being used as ‘without’ and the definition is changed to ‘without belief in god’ – what’s more is some go to the extreme to forget than when speaking of beliefs we are describing psychological states in things, and because without is synonymous with absence… Anything incapable of belief is then regarded as ‘without belief’ and we are back to silly statements like ‘rocks are atheist’.

As mentioned above, without is something not having something, aka being in absence of something.

Compared to the negation of not, which essentially is asserting the opposite is the case, without describes the absence.

Consider asymptomatic, someone without symptoms.

The reason ‘not’ is not used here, is because it is used as negation. Essentially it would not only mean they are without symptoms, but are well, which is not the case.

When it doesn’t really matter

As I mentioned, there are times where this doesn’t really matter at all. If we consider symmetry, asymmetrical should be thought of as something ‘not symmetrical’ but saying it is something ‘without symmetry’ doesn’t make much difference to the statement, as symmetry is dichotomous, and therefore we can infer from the without that the opposite is the case.

One of the short ways of describing someone who says the a means without which means the same as lack… and might either be using absent of belief or I don’t believe as their definition of lack is ‘lacktheist’ yet many lacktheists do not like this. But if atheist only means a lack of belief in gods, and theist = one that believes in gods, the a = lack. Lacktheist. What’s the problem? In fact, the lacktheist position may psychologically represent agnosticism/suspense of judgement but does give a different answer to the proposition ‘God Exists’ so perhaps the different idifier for ones ontology is also useful.

Whilst I may do a follow up of other common sin-onyms in the future, I think I’ve covered a few common ones that are all linked.

I’ll such a time, here’s some basic guidelines to avoid this sinful use of synonyms.