Home / Philosophy / Atheism as a Proposition

Atheism as a Proposition 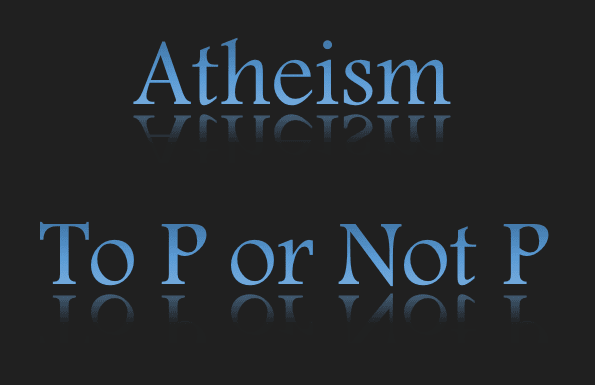 Whilst atheism is polysemous and is quite common to find it being described as a lack of belief in gods on social media and among certain circles, it isn’t the only way it is defined and, in philosophy (especially Philosophy of Religion), it is usually used in a propositional sense.

My goal here isn’t to tell you your definition is “wrong” as that is not how language works. My goal is simply to explain how statements like “if atheism is true…” and definitions like “the belief gods do not exist” are logical and applicable, especially when; linguistics, epistemology, and the understanding of belief are all taken into account.

So, how is the use of atheist as “one that believes gods do not exist” tied into propositional logic?

It starts with our understanding of theism.

Theism is described as the belief (at least one) god exists. For ease, we shall use God exists with the understanding this could be any deity and at least one of them.

What we can note here is two things:

First, a belief is something accepted as true, thought most likely, or a positive attitude towards a proposition. It is essentially describing an attitudinal mental state.

Contemporary Anglophone philosophers of mind generally use the term “belief” to refer to the attitude we have, roughly, whenever we take something to be the case or regard it as true.
….
Most contemporary philosophers characterize belief as a “propositional attitude”.

Second, an -ism is a distinct practice, doctrine, system or philosophy.

Therefore, it’s not an actual mental state held by someone, but describing something believed.

What it is actually talking about is the propositional content of the belief God exists. 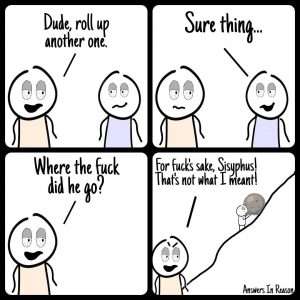 Trending
Dude, roll up another one!

In other words, theism is best understood as the proposition (or p) God exists.

I’m sure you also understand a proposition is a truth-apt bivalent statement. It can be true or false.

¬p = God does not exist.

So how does that related to atheism?

The prefix a- is polysemous but in a propositional sense should be understood as not, as in negation.

So if p = theism (God exists)
It follows ¬p = not theism (God does not exist) and the not is replaced by the a to make the word atheism.

Similar sentiments have been expressed by atheist philosophers such as Draper:

So, What Then of Theists and Atheists?

The theist accepts (or believes) the proposition of theism.

Bp = Believes God exists
It’s unnecessary to say, but they also lack belief in the proposition of atheism.
¬B¬p = Lacks belief God does not exist.

You could write the theist position as Bp ^ ¬B¬p

An atheist accepts (or believes) the proposition of atheism.

B¬p = Believes God does not exist.
As before, it’s unnecessary to say, but they also lack belief in the proposition of theism.
¬Bp = lacks belief in God existing.

Atheism and Theism are considered ontological positions. That is to say, they speak to the nature of God’s being. If you’re evaluating the proposition “God Exists”, perhaps in the form of a question, “Does God Exist?” and you think “Yes, this is (at least probably) True” or “No, this is (most likely) False” you have provided an attitude towards the proposition and affirmed an ontological position.

This isn’t a claim of knowledge, nor a truth claim in the sense of “My answer IS the case” but one of “This is what I think most likely”. You’ve given an epistemic answer, but you are not saying you know. You could, of course, claim to know one way or the other, but that’s generally not what folks are doing when giving an attitude towards a proposition.

Neither Atheist nor Theist?

Now, obviously, these are not the only positions one might hold towards the proposition. Whilst a proposition can only be true or false, our beliefs are not that binary. There is a third epistemic answer where you don’t accept either the proposition of theism or atheism. Essentially you suspend judgement lacking belief both ways.

This is known as the psychological state of being agnostic, or weak agnosticism. So, in regards to the proposition “God exists”, this is an epistemological position about the ontological positions.

You can be agnostic towards any proposition, but when someone is talking about how they are ‘an agnostic’ they are usually speaking of weak agnosticism. Some may be referring to hard agnosticism though.

Now, you might at this moment be thinking “agnostic deals with knowledge, not belief” and there are a few things to unpack here. The word’s root comes from “Gno” which means to know, but this isn’t exactly the same as knowledge. The Greek for knowledge was “episteme”, hence epistemology, and it’s largely understood that knowledge is a subset of belief, a very specific type of belief.

The word ‘know’, whilst it can relate to knowledge, is often used for things like information, awareness or certainty. Consider someone asking you what you want for dinner and you are responding with “I don’t know”. What you mean is, you’re not sure of what you want. Ok, we can infer that means you don’t have any knowledge of what you want, but that’s not the initial sentiment. So, agnostic being used in this way is saying “I don’t know (or I’m uncertain) if the proposition is true or false”.

There are also other types of non-belief that logically do represent the same position as an agnostic, however, whilst the agnostic is considered a direct response to the proposition with an inability to evaluate the truth, these are considered more indirect answers.

I detail this more in different types of not believing.

Anyway, my point here has been to show you how atheism can be used as a proposition, so next, I feel we have to answer two things. The first is why it would be used in this way, and the second speaks about what statements like “if atheism is true…” entail.

Why would it be used as a proposition?

As we discovered above, theism isn’t a mental state, it’s the concept. It speaks of something believed and therefore is describing the propositional content of the belief.

When discussing a proposition we know it is something that is true or false, and therefore the discussion revolves around it being true or false.

Rationality is, at least in part, reasoning using the rules of logic and probability theory, so if there is a type of logic that relates to the discussion then it makes sense to use those rules. For propositions, there is; propositional logic.

It makes sense to have descriptors that are mirrored and using the prefix a- as negation as you do in things like atypical on to theism to describe the negated proposition has that symmetry.

There are other issues with the psychological state definition, which can lead to special pleading and semantic collapse. Not to mention, it can lead to absurd statements like rocks are atheist or atheism is the default position.

There is good reason to see atheism in the propositional sense, which is why it is considered the normative definition within Philosophy of Religion, but there are justifications for other uses too, especially from a social, political or identity stance.

Whilst I do prefer the propositional use, I think the more important thing is the underlying content. That’s why we should stipulate what we mean and move on, rather than getting caught up in a semantic battle over what atheism means. We should accept it is polysemous and do our best to address people as they wish, not as we wish them to be.

This is why I’ve written this article, in the hope to explain why some atheists like me use atheism in the propositional sense and perhaps build an understanding that it’s not just atheists who understand it like this too.

Rather than get arsey when a theist says “if atheism is true..” and start talking about how atheism exists or you lack belief in God so atheism is true, perhaps understand they are likely using it in the propositional sense too.

What then do statements like “if atheism is true” really entail?

So, for something to be evaluated as true we have to understand that there is some propositional content there. Thus, when someone says “if atheism is true…” They are mean, “if it is true that God does not exist…”.

So what does that entail?

There are a lot of things you could suggest here:

And so on. This can create bad arguments around morality being wholly subjective or people having no value. However, this isn’t so much to discuss what some of these entailments are. What I mean here is, what does this entail for the atheist that holds to the position there are no gods?

Firstly, if one wishes to be rational, they have to be able to justify holding that position. The one that “only lacks belief” isn’t absolved of this though. They have to explain why they don’t accept the proposition being true or false.

We’ve covered this sort of thing in a few articles and videos, to name a few:

The next is to try and reconcile things like morality. Just because there is no god doesn’t make morality subjective. There are many misunderstandings and oversimplifications in morality conversations online. These can range from the definitions of subjective and objective to a lack of knowledge around meta-ethics or normative ethics and the arguments for and against any of the positions. Another misunderstanding could be along the lines of only considering things like value applying to things they value rather than considering there are things of value that they might not value themselves.

Morality is a complex and nuanced topic with a wealth of information to absorb. Unfortunately, the internet is rife with meme type answers. That is to say, overly simplistic responses that make people think things like the topics of morality are “solved”.

To start people off here are some resources:

These links just scratch the surface so please check the references and continue to investigate. There are people who hold different ethical positions to me that have some strong arguments for their positions too. I’ve changed my stance on morality a few times over the years, so please understand I am not trying to get you or anyone else to adopt my position, just encourage anyone who thinks along the lines of, “if there is no god then morality is subjective” that it is far more complicated than that.

The thing is, even if you do “only lack belief” these are still things you have to try and reconcile and justify. There are a number of bad takes out there and I would rather that someone is able to justify a position I disagree with well than simply agree with me.

So, part of the reason for seeing something in this propositional sense is to realise there is this justification needed for your position and investigation into a number of other topics. There are different types of not believing though, all with their own burdens. So even if you don’t accept a proposition as true or false, there still is justification required and a number of other considerations to take into account.