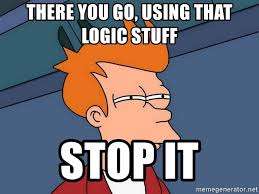 Logic is an important part of rationality. After all, acting rationally is acting in accordance with reason and according to the rules of logic, among other things. Which means that understanding the rules of logic are important if one wants to claim rationality for oneself.  There is more to logic than simply the rules though.  As William Hodges says in his book Logic, logic is also about consistency with regards to our beliefs.  Another important part of logic is its link to language, and how we use language.  The sloppier our language, the more likely we are to have errors creep into our thinking, and our beliefs; and the more likely our sets of beliefs are inconsistent.  So, understanding language and its link to logic, and understanding the link they both have to beliefs, will help us to think more clearly, and help us to have more consistent sets of beliefs.  It will, essentially, help us to be more logical.  It will also help with understanding other people’s arguments, as well as assessing and breaking down those arguments in a more logical manner.  We will begin with a discussion about what beliefs are.  So, what do we mean by belief?

Within the contemporary atheist and sceptic community, at least on places like Facebook, Twitter, and YouTube, there seems to be a lot of misunderstanding about what a belief actually is.  Many seem to define it as something like ‘accepting something is true without any evidence’.  Often attempting to define it in such a way that it relates only to religious people, with some attempting to define it in a wholly derogatory way.  With many even going as far as claiming they ‘hold no beliefs’, or ‘only accept knowledge’; claiming that they avoid beliefs because they only accept things with evidence.  Those that argue things like this show a clear misunderstanding of what a belief actually is.  We all hold beliefs, and even when we have knowledge of something, we still hold a belief about it.  Belief is a necessary component of knowledge.  Belief is not sufficient for knowledge, but it is necessary.  What, then, is a belief?

This is because not all statements are propositions, some are commands.  For example, ‘Go to the shop and get milk’ is a command, as is ‘Empty the dishwasher’.  If we replace the P in ‘Is it true that P?’ with one of those statements we are not left with a grammatically correct question.  If we replace P with a question, then it too fails to yield a grammatically correct question.  For example, if we replace P with ‘Does God exist?’, then we are left with ‘Is it true that does God exist?’.  Revealing an ungrammatical question.  So, as stated, as simple test to see whether we are dealing with a proposition is to replace P in ‘Is it true that P?’ with whatever string we are dealing with.  If we are left with a grammatically correct question, then P is a proposition.  Our response to this newly formed question is our attitude towards P, or our belief about P.

Consider a proposition like ‘it will be sunny tomorrow’.  This proposition creates a grammatical question by replacing P in ‘Is it true that P?’ with the proposition, showing us that it is a valid proposition.  We are choosing this proposition because it represents several basic ideas about language and beliefs.  The first basic idea is that the same string can represent several different propositions, meaning that it can represent several different beliefs.  If we consider the idea of this belief being stated every day for a year.  While we have uttered the exact same words each day, each tomorrow is a different day.  Each time the belief is uttered it represents the state of the weather the day after the day it is uttered, and therefore represents 365 different beliefs.

Another basic idea that this proposition represents is the idea that the same string can be uttered and can be true on some occasions and false on some others.  It will not always be sunny tomorrow, but it will be sunny on some days.  Each day the same proposition is used, but each day it represents a different belief, and each different belief can either be true or false.  Which leads us to another basic idea that this proposition represents, the idea that context is important.  The references that a proposition makes are an important part of the proposition, giving the proposition its context.  What we are saying is influenced by when we are saying it, where we are saying it, and why we are saying it.  All of these things give us a good understanding of why clarity is important when discussing propositions and beliefs, and why our language should be as exact and precise as possible.  Ambiguous references in a proposition, and belief, can lead to errors in logic, especially when considering sets of propositions and beliefs.  They can also lead misunderstandings when communicating and discussing beliefs.

The Importance of the Referent

This is because the referent in the word ‘God’ is a different referent.  It is important to have a clear referent, and when discussing beliefs, it is important to ensure that each party involved in the conversation is using the same referent.  As stated above, if each party is using a different referent then they are each arguing different things.  Each party might be using the same words, and uttering the same sentences, but they are actually making different arguments and expressing different beliefs.  They are, essentially, committing a form of lexical ambiguity, where one word is used to express many different ideas, and taken in completely the wrong way.  As with the ‘it will be sunny tomorrow’ proposition, context can help to clarify what the referent is, however sometimes we forget how important context is to the words being uttered.

The same can be said of our expressions of beliefs, we expect that the person we are expressing the belief to will understand these shortcuts of language.  However, these shortcuts can cause ambiguity, especially if the person we are in discussion with is not behaving with a principle of charity, does not understand the shortcuts, or has an agenda with the language that they use.  Clarity of language can help overcome all of these problems, and these kinds of ambiguity.  If our goal is clear communication, and if during a discussion or argument our goal is understanding and progress.  Other goals may cause problems of course.

The Problem of Ambiguity

All of this shows us why clarity in language is important, and why well-defined referents, as well as making sure that we understand the context of the referent, and the context of the belief or question, is important.  The same is true of our own internal sets of beliefs.  When we use sloppy language, we allow the chance for equivocation to come into our own internal sets of beliefs, and we express those beliefs sloppily.  For example, if we are in a conversation with a Christian and we declare that their god is imaginary, but in the same conversation declare that we are not claiming that God does not exist or that there is no God, then we have committed a form of equivocation.  The context of the referent may have changed for us, but the context of the cross-reference within the conversation has not.  We have expressed two very different beliefs using the same word.  We have made a cross-referencing error, and caused ambiguity.  The Christian will believe that we are still discussing their God, while in fact we are discussing a more generic God.  We have expressed our arguments and our beliefs in a sloppy manner, and we have allowed bad logic, and even perhaps bad reasoning, to creep into our arguments.

It is even possible to express a belief that sounds logical, but because of a badly defined referent it turns out to be an illogical statement.  Consider the statement ‘the keys are in the fruit bowl on the kitchen counter’.  If there is no fruit bowl on the kitchen counter, then we have put forward a statement with a referent that does not exist.  We have essentially put forward a meaningless statement, even if in error, because we have referred to something that does not actually exist.  The same could be true of any referent that is ill-defined, or is simply an empty placeholder word waiting to be defined.  If the referent is sloppy, ill-defined, or simply non-existent, then our statement is such too.

In conclusion, language is important to beliefs and to logic.  We must be wary of our use of sloppy language when we are expressing beliefs, and putting forward arguments to counter other beliefs and other arguments.  An understanding of how context words, and how referents and cross-referencing in statements works, is a vital part to improving our own use of logic.  Those that are concerned with how logical their beliefs are, and how logical their arguments, would do well to pay attention to these things.  We should pay attention to how we express our beliefs, and how others express their own beliefs, and understand how important context is to the belief being expressed, and the declarative statements being made.  The referents are important, who says them is important, why they are being said is important, and what is being said is important.  We can easily use the same words to say very different things, and use the same words to argue very different things, but actually simply be arguing in an illogical manner.