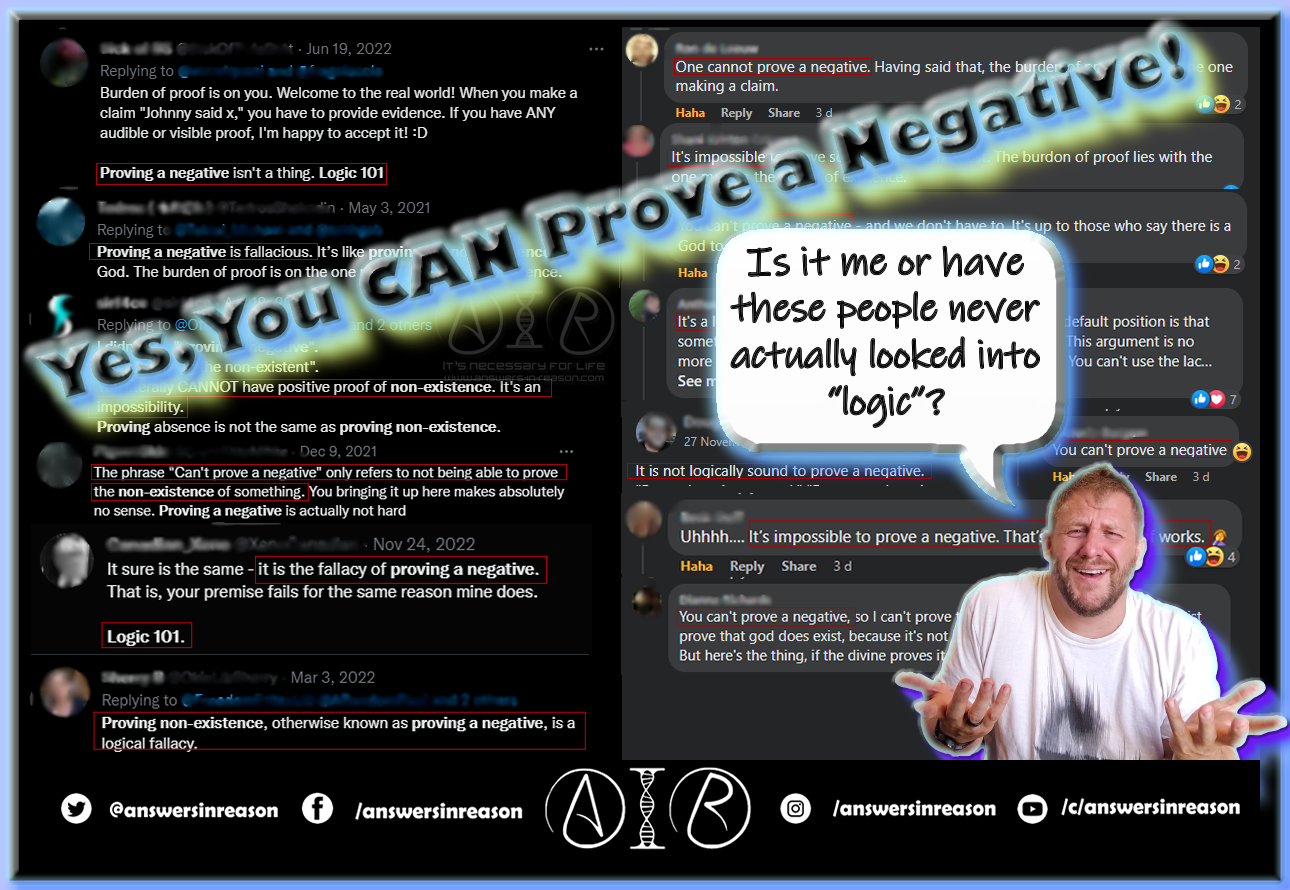 “You can’t prove a negative” is such a common phrase among atheists these days and it’s ridiculous.

It’s one of those things learned in meme-like fashion and is so unbelievably wrong.

It’s often accompanied by other claims that “it’s part of logic” which is also false. There is nothing in logic that says you cannot prove a negative.

Some posts that cover the laws of logic and how logic works:

So, the conversation takes a path of giving examples of negatives that can be proven, e.g.

I can prove to you, right now, there isn’t a corporal, visible, 6ft red dragon behind me right now. (Though there is a picture of a dragon on the back wall.)

I can prove it is not raining outside my house right now.

I can prove I do not have breasts.

And whilst the last one is debatable after how much I ate and drank over Christmas it shows there are some negatives that you can indeed prove.

Those would be different negatives. They are changing the referent or context and are no longer discussing the same proposition.

Consider how a theist might describe all the qualities of their god and various beliefs and you point out logical contradictions showing this claim is logically impossible and they alter the claim. You’ve proved one negative, so they’ve changed the referent.

Recently, I had someone say that it is part of the scientific method that you cannot prove a negative.

This is odd because that’s exactly what falsification is. In fact, the way the method works is that nothing is ever proved true, things are just considered true whilst there is enough evidence to support the line of reasoning and they remain in this “most probably true” area till they are falsified.

So, you could say it’s part of the scientific method that “you can’t prove a positive” at least if you’re talking in absolutes.

This particular person then went on to say that just showing a particular hypothesis false doesn’t mean you have proven a negative because there could be other viable hypotheses.

The idea in science is, you constantly try to prove negatives until there is only one viable option, at least with our current knowledge and understanding. At the very least, one option that seems far more likely than any of the others.

If you manage to get past these hurdles of people changing the referent, context, or moving the goalposts with negatives you are then often met with something like:

“You should know I was speaking specifically of non-existence”

So, can you prove non-existence?

Yes! You can prove non-existence. 🤯

Like the negatives before, you can’t prove all non-existence.

Some non-existence is provable.

Let’s talk about the Flat earth.

There are people that genuinely believe the earth is flat.

It’s highly evidenced that the earth is an oblate spheroid. There are experiments you can do at home to prove this. There’s even that documentary where flat earthers did these experiments and found out that their expectations of the earth being flat were false… Though they made various excuses to maintain their erroneous belief.

Either way, proving the earth is spheroidal, specifically an oblate spheroid, proves that the earth is not flat. These propositions are mutually exclusive.

You then get (at least) two kinds of responses to this.

Someone will claim that you’re proving a positive, not a negative, however, by proving the positive you are proving the negative as these propositions are mutually exclusive.

By proving the positive of P1 you are proving the negative of P2 as these propositions are mutually exclusive.

This isn’t always the case, if the two propositions were:

You then might end up in a situation where someone says something along the lines of “of course, I know our spheroidal earth exists but that doesn’t mean there isn’t a flat Earth out there!”

Again, we have two issues. The first is the changing of the referent I mentioned previously. When we are discussing the shape of the Earth, we are talking about our Earth, not some other undiscovered planet that by chance is called Earth as well.

The second is, even if there is another planet called Earth that is flat, that doesn’t mean we haven’t proven the negative about our Earth.

I also wonder why one would think another planet would be called Earth? 🤔

Even if we were discussing the proposition “no flat planets exist” we could justify believing this based on induction, and our knowledge of gravitational fields in the universe.

It’s definitely a stretch to definitively say “there are no flat planets in the universe” as we don’t have knowledge of all things but if we consider all the data sent back from satellites, deep space telescopes and so on, all planets seem to be spheroidal (there’s one exoplanet that’s rugby ball shaped) due to the fact that anything with enough size and mass to be considered a planet that gravity roughly holds them into a spherical or elliptical shape. The key word here is roughly, they are not exact spheres, they are rough, bumpy, sometimes more like a deformed egg than a perfect sphere, though from a distance they appear spheroidal.

So, whilst this doesn’t prove there are no flat planets in the universe, based on the data we have received and our knowledge of gravity, we can justify the belief that it is highly unlikely to have flat planets.

Is it a Logical Fallacy To Prove a Negative?

You might get some really odd claims like “It’s a Logical Fallacy to Prove a Negative/something doesn’t exist” – No, it’s not, that is a misunderstanding. I think when they say things like that they mean, “It’s a fallacy to assume a positive just because you can’t prove a negative.”

Except when you repeatedly see this, it can be hard to be charitable and assume they mean that. Like with many of the bad takes we have discussed before, it seems that these catchphrases have been passed around in meme-like fashion, and even if the original poster meant that, many truly believe it is fallacious to prove a negative.

Much like I mentioned at the start, some even claim that “you can’t prove a negative is part of logic”, some bring it up here too.

It’s got to the point where any time I see people post “Logic 101” on the internet, accompanied by a bad take on logic, I think they’ve probably never taken a logic 101 course. In fact, they have probably not opened a book or even read a paper on the basics of logic.

I’ll admit, most of my logical understanding comes from being a programmer, reading papers, and having conversations with folks who I know have studied logic. Whenever I am about to publish something about logic, I will always confer with them to ensure I have phrased things correctly and got the logic right. Mostly, the feedback is about issues with spelling and grammar rather than the logic itself.

You can’t falsify the Unfalsifiable

Eventually, you end up with a statement that is effectively, “you can’t falsify an unfalsifiable claim” – this seems to be what some online atheists and sceptics actually mean when they say you can’t prove a negative, though there are others that truly believe you cannot prove any negative.

But what is meant by “prove” and “proof” here?

I’ve already mentioned that science generally doesn’t actually prove things true, it just builds models around what things would look like if they are true and whilst they hold true they are considered true, but they are never actually proven true.

Whilst there are some things that I think we could safely conclude are definitely true based on all the evidence, arguments could still be made for a virtual universe or something out there like that meaning nothing we experience is actually true.

But within the paradigm of our existence, digital or otherwise, I think we can be highly confident some things are true.

And that is basically what we mean by proof here.

“Proof” is more of a mathematical term, because it is absolute with correct and incorrect answers.

A mathematical proof is an inferential argument for a mathematical statement, showing that the stated assumptions logically guarantee the conclusion.

When “proof” is spoken about outside of maths it’s generally speaking of justification or evidence.

Some pieces of evidence are so weak that people might conclude they are “not evidence” but that’s an unfortunate take, especially when sometimes these pieces of “not evidence” actually contain things that if accepted evidence would go against the claim.

When we have enough corroborating evidence to conclude a particular conclusion is most likely true we regard this as proof.

Whilst we might draw conclusions from evidence, it is once it’s reached the highest degree of confidence we regard it as proof, and we still have to keep in mind that we should treat this in the way science or fallibilists will. Just because it seems conclusive right now doesn’t mean it 100% is.

Simply holding evidence isn’t enough, though, we need to understand what that evidence is and what it entails.

To elaborate further, imagine if this was a genuine conversation.

I believe in evolution!
Why?
Cos I have all these papers on evolution.
Right, and what do they say?
Um, evolution is true.
Yes, but in a bit more detail than that, what is the mechanism that drives evolution?
Um, the gas peddle?

This person is not justified in their belief, even though evolution is true.

We have an epistemic responsibility, at least to ourselves, to ensure that we understand the things we believe.

I’m not saying we need the same level of understanding as an evolutionary biologist, that’s a massively unrealistic expectation. But a basic understanding of what evolution is, the ways it works, and why it is true should be a minimum for someone to accept it true, especially if you’re going to get involved in a conversation where you assert the truth of evolution or the falsity of creationism.

Likewise, if you’re not sure whether you accept either creationism or evolution, effectively you don’t believe either, then you should at least have an understanding of both topics and be able to explain why you are not convinced by either, at least if you take an active interest in these discussions and care about holding a rational position.

If you don’t care about any topic, but you are getting heavily involved in discussions about it, I’d suggest you need to find something better to do, as your behaviour is incredibly irrational.

Figured I would try something different and put the TL;DR version in an easily sharable image.

Enjoy your life; The significance of beauty Life Lessons

The life worth living; Virtues, an introduction Life Worth Living

Our Links
🏠 » Philosophy » Epistemology » Justification » Burden of Proof
a

“Because Life is too short For Genesis 2”
by Artificial Agent