The Problem With ‘Atheism is the Default Position’ Arguments 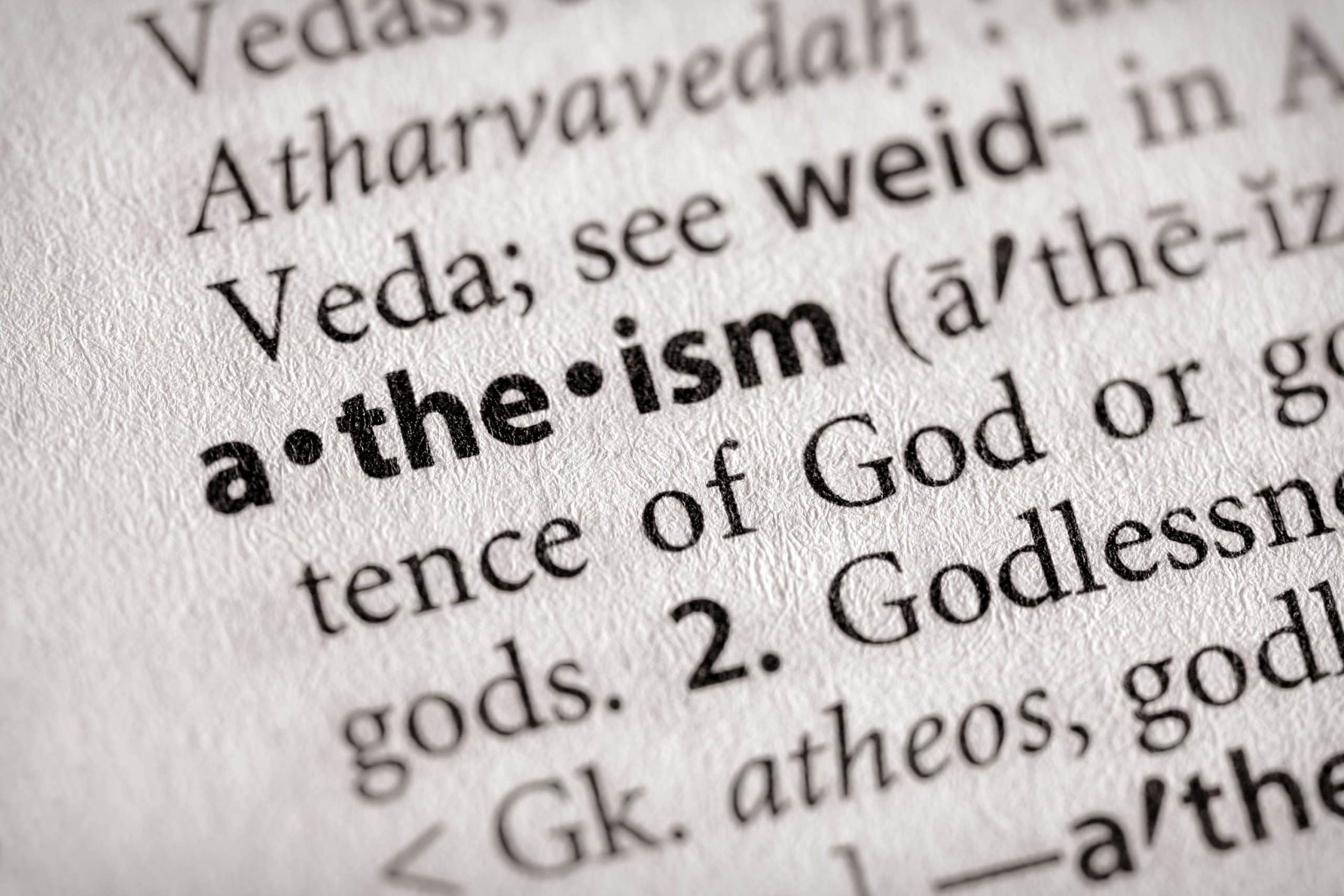 As an atheist, even one that doesn’t feel that in tune with many other atheists, I still want atheists to come from a position of strength. I want us to have good arguments, sound reasoning and solid logic.

This is a big part of why I have the Bad atheist arguments series and the SciPhi Shortz videos and podcasts that address common misunderstandings and bad memes.

Whether we like it or not, the behaviour of atheists reflects on us all. They shouldn’t, but brains are lazy in general and tend to make hasty generalisations. We do it ourselves at times too. We’re often guilty of judgements of theists, or specific kinds of theists, forgetting to take time to understand the individual’s position fully.

One of the major proponents of this argument is Ra and he even admits that the reason for this argument is to try and make out that atheism is the “norm” for everything. He hangs logic and epistemology at the door and argues from an ideological standpoint. He starts with a conclusion and fills in the blanks instead of working from the ground up.

My goal today is not to discuss the issues with Ra’s argument about rocks being atheists, which I believe Dave steelmans and covers in detail in this video, but to discuss the key issues for viewing atheism in this “default state” way.

The only definition of atheism that works is the absence of belief in at least one deity. This is not a responsive absence, this is just an absent mental state. One key issue we will find to start is, an absence of a mental state is not a position at all, so the “default position” argument has already failed, and we shall focus on the “default state” instead.

The next issue with this argument is, we don’t tend to describe much of anything based on purely one thing it lacks.

Rocks also don’t eat animal products. By that notion they are vegan. But we wouldn’t describe anything without the ability to eat or perform any form of energy exchange in terms of something can eat. It’s completely pointless, and to then say “veganism is the default state” doesn’t really add any power to arguments for veganism. In fact, it would make vegans look pretty silly if they started making these sorts of arguments.

Churches also are absent of the belief at least one god exists, and don’t eat animal products. Are churches atheistic vegans too?

We might regard churches as theistic because they house theists and promote a theistic religion, but we wouldn’t think of them holding or lacking a mental state. Religions don’t hold mental states, yet we generally wouldn’t describe them as atheistic, the religion would be theistic if it promoted a belief in a deity and the believers of said religion believed in a deity. An atheistic religion is one without deities and the followers don’t believe in deities. The religion doesn’t hold mental states so theistic and atheistic are not describing mental states here. It’s clear there is more to using the adjective atheistic or the noun atheist than just describing an absent mental state.

If we don’t have a mirrored definition of atheistic and theistic, we can end up in a paradox of something being both theistic and atheistic too.

Whilst it is true that rocks, churches and religions are absent of mental states and don’t eat animal products we can see how absurd it is to refer to them all as atheistic vegans.

With all this in mind, it is safe to conclude that atheism can’t JUST be describing an absence of a mental state, and therefore cannot be a “default state” for all things.

So, people might, at this point, introduce a modifier. They will say that it has to be a person to be an atheist.

Even within the definition of an -IST it states that you are a follower of a distinctive practice, system, or philosophy aka an ISM. It also says you can’t be born an -IST. This makes sense because you are not born following any -ISM.

I agree that the -IST is one that needs to ascribe to an -ISM, however, if atheism describes the absence of a mental state in a person, does that mean they have atheism? Or that they are an atheism?

This is, of course, an absurd take, but it does highlight that atheism is being used in an atypical way, at least in regard to how an -ISM is usually used. (Which is a distinctive practice, system, or philosophy, not merely an absence of one, and especially not describing an absent mental state.)

Anyway, the point that folks are usually making here is that babies are absent of the mental state of a belief in at least one deity. They are not wrong. They say that, because we are all born without that belief and atheism describes an absence of belief in deities then atheism is the default state for humans.

On the surface, this does seem correct, because babies do not hold the belief at least one god exists.

Babies also don’t eat animal products except for the milk their mother provides with consent, so they are also vegan or at the very least vegetarian if you don’t agree with the consent point. Does that make veganism/vegetarian the default state?

We notice something intuitively wrong with this statement, especially if we have any understanding of the biology of humans. Sure, we don’t eat animal products as babies (with the exception of consensual milk from our mothers), but we are omnivorous creatures. We survived in our environments because of this. It’s not until someone makes the choice to be vegan or vegetarian that we would label them so.

This highlights 2 more problems with the babies are atheist argument.

The first is around identity. A vegan is someone who consciously chooses to eat a vegan diet and identify as a vegan. If someone grew up in a location where meat was not an option, they might be eating a vegan diet but not actually be a vegan because they would eat meat if it was an option. Equally, a baby can’t consider the reasons for and against being a vegan and choose to identify as one.

In the same breath, a baby lacks the cognitive abilities to consider the proposition, ‘God exists’, and hold (or lack) beliefs as a response to this proposition. Yes, they are a human that is absent of a particular mental state, but there is clearly a little bit more to being an atheist than that.

Like a vegan has considered eating meat and chosen to eat a vegan diet and identify as a vegan, an atheist sure has to consider if a god exists and choose to identify as an atheist.

Another issue with this default state argument is that due to the way we evolved we are prone to assigning agency. This trait helped us survive in our formative years. A rustling in the bush may have been nothing, but preparing for it to be a lion increased survival. Thus, we evolved a sense of paranoia which lead to superstition and all sorts of religions and rituals.

Even if we could delete all knowledge of religion and gods from people’s minds, but leave everything else intact, it is likely we would still start assigning agency and be a superstitious species. We may not believe in the same gods or religions as we do now, but it is highly likely new ones would be invented.

Yet another issue with this default state argument is it is a defeater of other atheist arguments.

Many atheists like to claim we are more rational, intelligent and moral than theists. So let’s consider these claims in line with atheism being the default state

If atheism is the default state, and all babies are atheists, then we have to massively reduce the average intelligence of atheists. Why? Well, you give babies an IQ test and see what they get.

I know this seems absurd, but if babies are in the set of atheists, then it’s a logical entailment that they are to be taken into account over issues like intelligence. The issue is exacerbated by including rocks.

Excusing the issue with the statement many atheists make, that morality is wholly subjective and therefore there is no such thing as more or less moral and statements that say as much are nonsensical or at the very least, poorly phrased, we are left with a different issue.

When something is amoral, it’s judged to not have anything to do with morality, like someone drinking a glass of water. It is neither good nor bad. However, an amoral person is someone that is not concerned whether their actions are good or bad. They can consider what they are doing and can even make a moral judgement but just don’t care.

Babies are unmoral. They have the potential to be a moral agent, even if they do not yet possess the cognitive abilities to be one yet. We cannot influence their behaviours in a moralistic way. There is no intent, they are just reacting to various stimuli. Again with the intelligence issue, with unmoral things in the set of atheists we seem to have an issue.

And again, we have an additional issue when you include rocks. Rocks are nonmoral. They have no relation to morality whatsoever.

By far the most problematic part of the default state argument is that of rationality.

Rationality is complex but can be described as reasoning using the rules of logic and probability theory. We’d also say things like holding coherent and consistent beliefs are things that make you rational.

If babies and rocks are in the set of atheists, then again we have an issue because these things cannot reason and are therefore not rational.

So, it would seem that we have an issue with contradictory statements here. There is a clear issue with ideas being conveyed.

In the context of everything discussed in this article up to this point:

It would seem that anyone that holds to atheism being a default state AND a rational position is holding contradictory beliefs and is, therefore, irrational.

Even if you hold atheism as a lack of belief in gods, or not believing in gods instead of the positive belief gods do not exist, it seems that for many of the other statements we atheists make, being an atheist has to at least be a considered response to theism.

This may not solve all the issues that could be raised in the ongoing and pointless semantic wars, but it does solve the issues with atheism being reduced to an absurd position and people making these absurd statements like, rocks are atheists, we are all born atheist, and atheism is the default position.