Home / Misc / Philosophy / A foetus is not a person, so abortion is morally permissible.

A foetus is not a person, so abortion is morally permissible.

A foetus is not a person, so abortion is morally permissible. 9th March 2018 Dave Rowlands
MiscPhilosophy
0 Comment
AbortionBodily autonomyEthicsPhilosophyPro-Choicepro-lifesociety 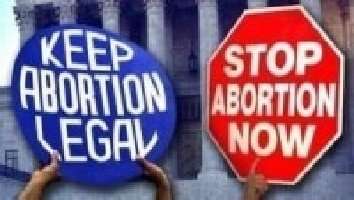 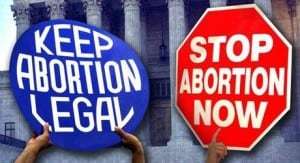 Before beginning a discussion about the strengths and weaknesses of this stance it is important to first attempt to define ‘person’.  Philosopher John Locke defines a ‘person’ in his work ‘Essay concerning Human Understanding’ as ‘a thinking, intelligent being that has reason and reflection and can consider itself as itself, the same thinking thing in different times and places; which it does only by that consciousness which is inseparable from thinking’ (Locke in Cottingham, 2008, p275).  Using Locke’s criteria for what defines a being as a ‘person’ we can see that a foetus does not match the criteria of ‘person’.  A foetus is not ‘self-aware’, it is not a thinking, intelligent being capable of reason and reflection.

However, accepting Locke’s definition of ‘person’ here leaves us with a problem.  It does not take into account the capacity to feel pain.  This means that using Locke’s definition, and using the argument that abortion is morally permissible simply because the foetus is not a ‘person’, then we must allow that infanticide too is morally permissible simply because a baby does not match this criteria.

Mary Anne Warren, in her article titled ‘The moral and legal status of abortion’, attempts to set out the criteria of ‘person’ in a slightly more precise manner.  In her article Warren lists a set of traits she believes are central to the concept of ‘personhood’.  Though she declares that a being need not necessarily match all of the criteria in order to be regarded as having ‘personhood’, a being that matches none of the criteria cannot be regarded as having ‘personhood’ (Warren in Barber, 2011, p189).  Warren’s criteria are listed as follows :

1 – Consciousness (of objects and events external and/or internal to the being), and in particular the capacity to feel pain;
2 – Reasoning (the developed capacity to solve new and relatively complex problems);
3 – Self-motivated activity (which is relatively independent of either genetic or direct control);
4 – The capacity to communicate, by whatever means, messages … on indefinitely many possible topics;
5 – The presence of self-concepts, and self-awareness…’ (Warren in Barber, 2011, p188)

Here we can see that Warren has taken into account the capacity to feel pain as part of the criteria of having ‘personhood’.  As Warren declares that only a being that has none of these features cannot be considered a ‘person’ then it does not exclude a baby from having ‘personhood’, it simply has not acquired the status of ‘full personhood’.  So does Warren’s definition of the concept of ‘personhood’ allow for the justification that ‘a foetus is not a person, so therefore abortion is morally permissible’? 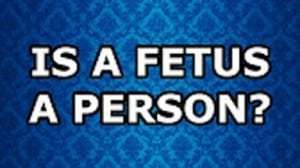 Taking the argument at face value it would appear so.  Upon deeper reflection however this leads us to further problems.  We must accept, using Warren’s criteria for ‘personhood’ combined with the argument itself, that abortions after 23-25 weeks become immoral regardless of circumstance; for it is at around 23-25 weeks that a foetus develops the capacity to feel pain (http://www.ncbi.nlm.nih.gov/, accessed 2015).  This would mean that were the mother’s life in danger because of the pregnancy it would be immoral to terminate the pregnancy.  This could potentially put both the mother and the child at risk of death, showing us that the justification for abortion being morally permissible because of ‘personhood’ status is far too simplistic.

There are those that argue this is the case of course, that the foetus, regardless of its current lack of ‘personhood’, does have the potential to become a ‘person’ and therefore we are taking the life of a ‘person’ by extension.  The argument for potentiality leaves something of a problem though.  If we were to perform reductio ad absurdum on the argument we are left with the idea that it becomes immoral to allow a woman to have their period.  A woman should constantly be pregnant with a child, for each egg has the potential to become a ‘person’.  It also means that all forms of birth control become immoral, as each form of birth control stops the potential ‘person’, in the form of a sperm or an egg, from being given the chance to develop.  As such, the idea of ‘potentiality’ cannot serve as a solid argument against the idea of abortion without leading to other problems.

American philosopher Don Marquis, in his journal article ‘Why abortion is immoral’, makes a different case than the potentiality argument.  Marquis argues that it is ‘immoral to kill something if it deprives it of a future like ours’ (Marquis in Barber, 2011, p188).  As terminating a foetus is indeed depriving it of a future like ours, it must then be concluded that terminating a foetus is wrong.  This argument also seems to hold against the idea of the termination of a coma patient, for terminating a coma patient would deprive the patient of a future like ours.  The argument also seems to allow for the legitimacy of certain types of contraceptive measures.  However, this argument does not allow for circumstances such as when the mother’s life is in danger due to the pregnancy, and it also does not take into account the mother’s right to bodily self-determination.  Should the mother’s right to life and bodily self-determination not be taken into account? 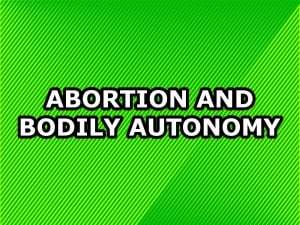 This is the stance taken by Judith Jarvis Thompson in her essay ‘A Defence of Abortion’.  Up until Thompson arguments concerning the morality of abortion had focused on the rights of the foetus, ignoring the rights of the mother as host (Barber, 2011, p155).  Thompson approaches the argument with the idea that the mother’s rights supersede the rights of the foetus.  While Thompson herself agrees with the premise that a foetus is not a person, stating that ‘a newly fertilized ovum, a newly implanted clump of cells, is no more a person than an acorn is an oak tree’, she does not approach the argument from this view (Thompson in Cottingham, 2008, p591).  She allows for the premise that a foetus is a ‘person’ from the moment of conception, and proceeds to argue from that premise.

There would probably be few that would argue that the violinists ‘right to life’ takes precedent over our own right to decide what to do with our body.  She argues that though it would be doing the violinist a kindness, and it would be a morally right thing to allow the violinist to use our kidney, it is by no means a moral imperative or necessity.  It is within our rights to refuse to allow the use of our body for something to which we did not agree.  It can be argued that this analogy does not strictly hold up when using it to argue the case for abortion of course.  That this relates more to the case of forced insemination, rape for example.  The woman has not given permission for her body to be used to house the foetus, and it was forced upon her, similar to the case of the violinist being forced upon ourselves.  What about other cases however?  What about a case where the mother’s life is in peril due to the pregnancy or the birth?

Again, most would argue that one should not be forced to give their life in order to save the life of another.  That it is our right to choose to do so, but it is not a moral necessity.  Thompson argues that this too should be the case with the mother’s right to abort in a case such as this.  That there is no moral imperative forcing the mother to give her own life in order to save that of the foetus.  The termination of the pregnancy could be considered a form of ‘self-defence’, and in moral societies a person is granted the right to ‘self-defence’.  However, where does that leave us in the case where one simply ‘changes their mind’ or the pregnancy is simply ‘unwanted’?  In cases like this does the ‘right to life’ of the foetus supersede the mother’s right to bodily autonomy?

Well if we are to imagine that it would be acceptable to revoke permission to the violinist for the use of our kidney, then yes, the argument should still hold up in the case where the pregnancy is simply unwanted, or the mother simply changes her mind.  It is still the case that bodily autonomy supersedes another’s ‘right to life’.  It may be argued that it is a cruel thing to do, because we are allowing another to die when we could save them, but it is not morally imperative to allow them the use of our body.  We should also take into account that we are not the one who has to live with the consequences of the choice to either keep or abort the foetus.  The consequence of the choice lays with the mother, both physically and emotionally.  If it becomes morally necessary to force the mother to give birth to an unwanted child then should it not also follow that it becomes morally necessary for society to accept some of the responsibility for the care of the child?  Does the moral responsibility end at telling the mother that she must give birth?

Something that these arguments overlook however is the fact that regardless of the moral or legal implications of abortion, history shows that abortions still take place.  History also shows that this can lead down a dangerous path, for in the past many have died from what are known as ‘back alley abortions’.  It can lead to not only the termination of the foetus, but also the death of the mother.  If one is going to argue that abortion is immoral because it leads to the death of a ‘person’, then surely it should be considered immoral to force a woman to acquire an abortion in a manner that too may lead to death of a ‘person’ when society has the capability to offer it without that risk?  Should the pragmatic approach not be taken in the case of abortion to ensure that the amount of suffering is minimal rather than increased?

If we examine the arguments honestly it seems that the argument that abortion is morally permissible simply because a foetus is not a ‘person’ is among the weaker of the arguments.  If one is looking to make an argument for the moral permissibility of abortion then there are much stronger arguments available to use, such as Thompson’s argument.