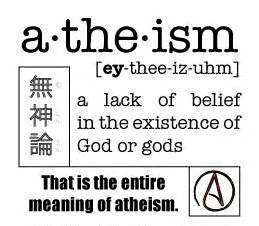 It is commonplace to hear these terms Agnostic/Gnostic as a modifier to atheism these days rather than Agnostic being that withholding judgment position.

Please note, atheism and agnosticism are polysemous, and language is defined through common use. What I hope to do is draw your attention to the difference between the colloquial definitions and the normative ones.

If we move past the normative definitions and use these colloquial terms that are often used by fellow atheists, who probably fit the category of ‘New Atheists’, they mean (broadly speaking):

So, a Gnostic Atheist also believes God does not exist.

What then for someone like me? I believe gods do not exist. Whilst I am fairly psychologically certain of this, I have no epistemic certainty of this matter. That is to say, I do not know that no gods exist. I do not know if my belief is true, even if I can justify why I hold this belief.

I have nowhere to rest on this ‘new atheist’ scale, especially when many conflate disbelief with lack belief, rather than disbelief = positive belief in not (e.g. Disbelief in gods existence ought to mean belief gods do not exist)

What we are left with is an ‘agnostic atheist’ who lacks belief in gods existing, but also lack belief in god not existing – which is the same as the philosophical use of Agnostic, and the ‘Gnostic Atheist’ who Knows (and by extension believes) gods do not exist.

So, what is my position?

Well, simply put, I am an atheist. I hold the belief gods do not exist. I do not claim to know this. I use the philosophical definition. The one that provides an epistemological answer to the proposition ‘God Exists’. I don’t fit the new atheist’s definitions, because ‘agnostic atheist’ is basically the same position as the classic ‘agnostic’, and a ‘gnostic atheist’ is saying they know no gods exist.

I’ve been called a ‘gnostic atheist’ and an ‘anti-theist’ and all sorts for my stance, but none of them match my definition.  The closest modifier you could get for me is a global atheist.

Please note, It is actually superfluous to denote the second half of theist an atheist with the portions they lack belief in, as from belief in one of the propositions (theism or atheism) we infer they lack belief in the other. Otherwise, we would have contradictory beliefs aka cognitive dissonance.

With the colloquial definitions, not only are they muddy in themselves, but everyone uses them differently. Some folks conflate holding a belief with making a truth claim of epistemic certainty, some conflate holding a positive belief with a knowledge claim, and as I said, I have been called an ‘antitheist’ simply for holding the belief gods do not exist, which is not the case. An anti-theist is someone who believes no one should hold the belief gods exist. (Or in some extreme cases, that theists should not exist… if you can infer what I mean.)

So, whilst I can communicate with these people, and generally know what they mean, I do find myself having to ask exactly how they are defining the terms each time. Again, if everyone used the normative definitions of these terms, this would not be a problem.

Often you find folks focusing on the ¬Bp portion to define atheism. They focus purely on the lack of belief and not the positive belief part.

If we are defining our positions purely around what we lack belief in like some of my fellow atheists do, then theism would be described as ¬B¬p.

Therefore, Agnostics are also theists. But you can’t have a theistic atheist or an atheistic theist. They are a contradiction in terms.

This is a problem with only considering part of the belief spectrum when discussing a proposition.

Equally, if you allow atheism to be described on ¬Bp but refuse to let theism be described in terms of ¬B¬p then you are guilty of special pleading.

This is why I say there is an issue with the logic in defining atheism simply as a ‘lack of belief’. You either have to allow both theism and atheism be defined by what they lack belief in, causing an issue for someone that lacks belief both ways, or you have to commit a special pleading fallacy to say that theism is a positive belief whilst atheism is only defined as a lack belief.

The ‘Agnostic’ in ‘Agnostic Atheist’ is superfluous

Regardless of the normative definitions, agnostic atheist usually is meant as ‘Don’t know and don’t believe’ or a similar variation.

When you BELIEVE something, you don’t necessarily know it, there is no claim of knowledge being made or an assertion it is true, just a positive attitude towards the proposition, something you accept as true etc.
“I believe the bridge will hold my weight” – this isn’t knowledge or epistemic certainty, even if it indicates a level of psychological certainty.

When you KNOW something, by extension you also believe it.
If you were to claim otherwise, e.g. “I know I am human but I don’t believe I am human” it would sound quite weird, right?

Therefore if you define atheism purely in terms of “lack belief” you’re already saying you don’t know because you’re saying you “don’t believe” or “lack belief” and you cannot have knowledge without belief.

Even if you, like me, define atheism as “The belief gods do not exist” I am still not making a knowledge claim, I am just stating what I believe to be the case.

So under both definitions of atheism, no one is claiming knowledge, therefore it [the agnostic modifier] is superfluous, especially with the lack belief/don’t believe definition.

And if someone does claim knowledge, they would say “I know God does not exist” would they not? So until someone claims they “know” something it is safe to assume they don’t have knowledge.

Are there more answers or positions to be held?

Of course, the 3 answers I have given above, theist, atheist, and agnostic, are ones that fully answer the proposition however there are other positions.

There is the IGNOSTIC position. An ignostic is someone that thinks the agent in the proposition (aka god/gods/deities) has no coherent, consistent and unambiguous definition. With the agent so unclear in definition there is no point in even taking the time to consider the Proposition.

You could argue that the ignostic position is an extension of agnosticism, but instead of being applied to the P ‘God Exists’ it is applied to ‘What is God’.

They cannot be regarded as an atheist in the sense I provided above because if they find the topic, god, meaningless and incoherent, they can’t have a belief it does not exist, and are essentially withholding judgment until such a time they are provided a meaningful definition.

There is also an Apatheist… someone who just doesn’t care enough to consider the proposition. Again, this could be argued as a subset of agnosticism but they are not withholding judgement because they are uncertain, they just don’t care.

Neither of these positions are a direct answer to the proposition, but they are still valid positions that need to be considered.

There are also innocents, which are broken up into those who have not heard the proposition, and those that do not even have the cognitive faculties to consider the proposition and hold beliefs (like babies). They are completely absent of belief.

I mentioned this one earlier. Someone that believes no one should believe in gods. We could argue that this is extreme atheism, you would imagine that someone who believes as the antitheist does that the would hold a very strong belief gods do not exist, if they described themselves as an ‘agnostic atheist atntitheist’ you’d be a bit puzzled… someone who does not believe either way trying to get others not to believe? huh?

So yes, I would usually expect an Antitheist to be a strong atheist (psychological certainty, not epistemic certainty) but that is not always the case. The only thing we can definitely infer from the position is that they believe no one should believe in gods.

As you can see, there are a number of different types of non-theist, with clear distinctions around what they believe about the proposition, or indeed if they are completely absent of belief

Think about this for a moment, non-theist is an umbrella term for everything that is not a theist. So, whilst all atheists are non-theists, not all non-theists are atheists.

Vehicle is an umbrella term for a thing used for transporting people or goods. So, whilst all cars are vehicles, not all vehicles are cars.

Cars is an umbrella term for a road vehicle, typically with four wheels, powered by an internal combustion engine and able to carry a small number of people. A Ferrari F40 is a type of car, not all cars are Ferrari F40’s.

Great Ape is an umbrella term for taxonomic family of primates. Whilst all humans are great apes, not all great apes are humans.

To that end, not all Non-Americans are Brits either… so we can’t define things simply because they lack something… if something lacks being American, that doesn’t automatically make it British, they have to also be positively British.. otherwise, you’re going to regard all other nationals to being British. That isn’t how it works, and that isn’t how beliefs ought to work.

Should we really define ourselves purely by what we ‘Lack’?

Is defining ourselves by what we lack really enough?

A female child lacks boobs, are they still female? A male lacks facial hair, is he not male? A robin reliant lacks a 4th wheel… is it a tricycle? Someone lacks a degree, are they stupid?

Someone who lacks hair, are they bald or did they shave it off? Again we see 2 types of non-haired person, we can’t instantly assume they are bald. Baldness in men is related to the male hormone dihydrotestosterone, which causes old hairs on the scalp to be replaced by progressively shorter and thinner hairs in a predictable pattern, beginning at the temples and crown of the head. Again, it is also because of the things they have, not just what they lack.

When we apply this to other things it seems ridiculous doesn’t it? Focusing on one thing that something might lack, but not taking everything in to account they DO have can lead to these errors I have been speaking of.

As you can see, the conflation of non-theist to = atheist has issues with contradiction/special pleading, as well as opening the category of atheist incredibly wide enough to not be able to make any specific inferences of what people DO believe.

I am no way saying that you have to use the definitions the way I have described them above, I am just explaining why they are the most logical uses of the terms.

If you want to reject the rules of logic, and use a colloquial definition, that is fine, I will respect what ever identity you want to be called. I do not want you to prescribe your definitions on to me or anyone else.

The last point I will leave you with is a quote from Trolley Dave I turned in to a meme for my article ‘Why should we use the rules of logic?’

If you’re interested in seeing the special pleading in action, Dave wrote a post the other day about just that. You can find it here.

Below are a number of articles that have either influenced my work, thought processes, or provide a different dimension to what I know, as well as other articles related to the topic outside of AiR. These are all good resources that are worth checking out!