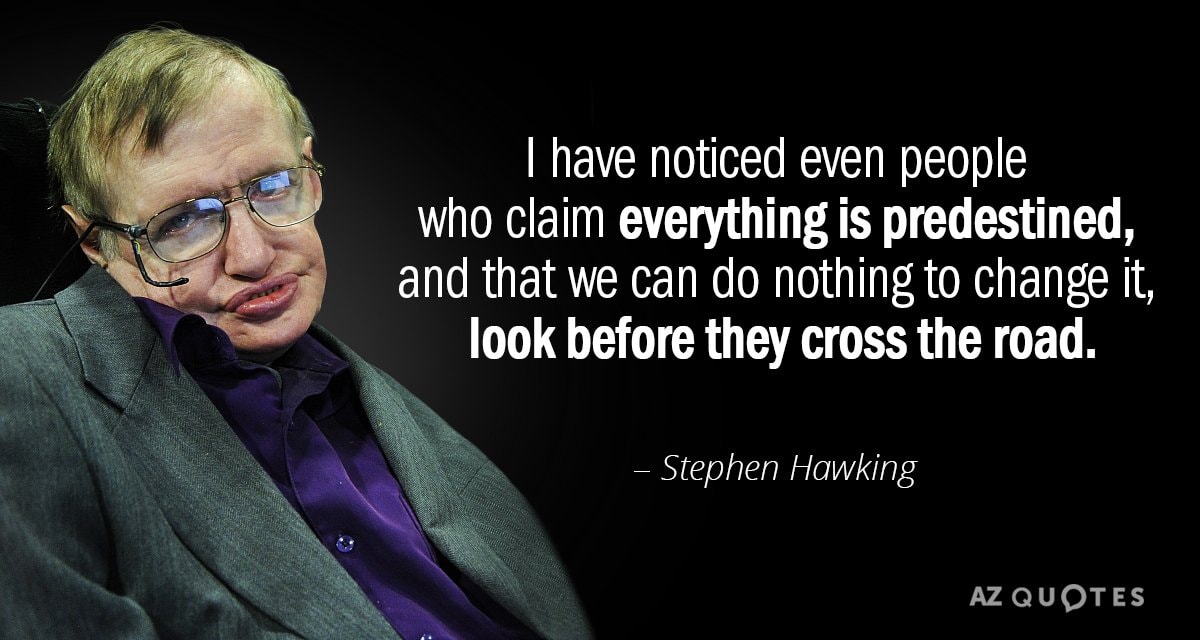 So What is Compatibilism?

This ties into what I was saying about moral responsibility, you need agency and intent and in a hard deterministic universe, you’re no more than an NPC in a game following actions you’ve been programmed to do. Compatibilists feel that free will, or the freedom to do otherwise, can still exist within the confines of a deterministic universe.

Some compatibilists hold this because they think the truth of causal determinism would not undermine our freedom to do otherwise (Berofsky 1987, Campbell 1997, Vihvelin 2013, etc.)

Other compatibilists show less concern in rebutting the conclusion that the freedom to do otherwise is incompatible with determinism. Compatibilists of this stripe reject the idea that such freedom is necessary for meaningful forms of free will (e.g., Frankfurt 1969, 1971; Watson 1975, Dennett 1984)—the “varieties of free will worth wanting,” (Dennett 1984).

Some seem to go further still stating they don’t feel this sort of freedom is connected to moral responsibility.

And even more notably, some compatibilists simply deny that freedom of this sort is in any way connected to morally responsible agency (e.g., Fischer 1994, Fischer & Ravizza 1998, Scanlon 1998, Wallace 1994, Sartorio 2016).

So what we have is not necessarily a unified approach to compatibilism, but in fact, several different approaches to defining how some form of free will is compatible with a deterministic universe.

Of course, I think many of us will agree that action and will are two different things. Sometimes you will something you have no ability to do, and some things you are forced to do things you might be ‘willing’ not to.

Thus I do think we have an issue with classical compatibilism that does need refining.

To cite just one shortcoming, various mental illnesses can cause a person to act as she wants and do so unencumbered; yet, intuitively, it would seem that she does not act of her own free will.

Of course, it comes under far more scrutiny than that from incompatibilists.

It seems classical compatabilism is somewhat ‘half baked’ – and that’s not just because they released a couple of sequels. It fails to answer the incompatabilist convincingly.

Finally, P.F. Strawson defended compatibilism by inviting both compatibilists and incompatibilists to attend more carefully to the central role of interpersonal relationships and the reactive attitudes in understanding the concept of moral responsibility (Strawson 1962). Each of these contributions changed dramatically the way that the free will problem is addressed in contemporary discussions. No account of free will, compatibilist or incompatibilist, is advanced today without taking into account at least one (if not more) of these three pieces.

It starts with speaking of how we have no power over facts, they are things that just are, and builds in to an argument that says if determinism is true then no one has any power over their future.

here is a rough, non-technical sketch of the argument:

According to the Consequence Argument, if determinism is true, it appears that no person has any power to alter how her own future will unfold.

The argument above is at the very least, valid, and whilst many incompatabilists might feel it us unsound, have yet to fully demonstrate why.

A Challenge to the Principle of Alternative Possibilities

One compatibilist strategy for responding to the Classical Incompatibilist Argument is to concede that perhaps the Consequence Argument provides us with good reason for thinking that determinism rules out the ability to do otherwise while maintaining that such an ability is not necessary for free will. In other words, the compatibilist might sidestep the issues raised by the Consequence Argument by directly attacking the first premise of the Classical Incompatibilist Argument, which states is if a person acts of her own free will, then she could have done otherwise. This compatibilist response rejects a conception of human agency that locates control in the ability to do otherwise. Alternatively, it seeks to ground an agent’s control over his action in other features of his or her agency. In “Alternate Possibilities and Moral Responsibility,” (1969) Harry Frankfurt powerfully develops an argument that gives compatibilists the resources to argue in just this way.

Frankfurt’s argument was directed against the Principle of Alternative Possibilities (PAP):

PAP: A person is morally responsible for what she does do only if she can do otherwise.

This particular argument, for me, does not sit well. Even reading some of the arguments against the PAP it doesn’t make sense to me and seems, when distilled, to take a purely consequentialist nature to the actions.

If you’re forced to do a good thing, have you done a moral thing? Whilst it is good you have done good, if you have not chosen to do the good thing, and had no other choice available to you, whilst the outcome is positive it doesn’t mean you were behaving morally. The same can be said for being forced to do something bad. You might ‘will’ to do something good, or at least not do the bad thing, but whatever the circumstance that leads you to this point, you have no choice in the matter but to do the bad thing. The consequence is bad, but the behaviour was necessarily immoral, and was probably, at the very least, a lesser of two evils type deal.

Now, I accept that once you have spent a lot of time studying morality and thinking about moral quandaries, your choices will become more autonomic. You won’t spend as much time deliberating them as you have already thought problem x through and if you want to be moral then doing, or not doing, x is what you will do. You have spent the time working yourself into being a good moral character, the fact you are not having to spend as much time consciously processing things doesn’t negate the morality of what you are doing. As a moral agent, you will still understand why you are doing the good thing and why the thing is considered good and your will to be a good person.

Perhaps, from this perspective, I can somewhat agree that PAP isn’t the only thing to consider. I still think the moral agent needs the ability to do something else if they so wished, but understand there will, at least perceptively, only be one choice you can take like the aforementioned moral agent. This, of course, is a distinction between choice and ability, and we can go back round in circles to the ‘desire argument’ as well, but let’s move on.

Focus upon the Reactive Attitudes

This, at least to me, sounds more like a slightly different take on an emotivist moral argument.

As I am sure you know from reading my articles on ‘Does Morality Have a Purpose?‘ or watching the YouTube video on: Morality and Misconceptions, this isn’t a view I share.

Essentially the argument proposes that what holds someone to a moral responsibility is someone elses morally reactive attitude. This does not sit well with me. If a young lady was passed out wasted, and the moral actor decided to take advantage of this, sexually abuse her and redress her and she knew nothing of the events of the previous night, she would not have a reactive attitude and if no one else saw this happening neither would they. If you also do not feel guilt and just feel pleasure, the only reactive attitude is a positive one, and I think anyone reading this would agree that the invasion of body autonomy is indeed, immoral. Of course, one could argue that we are now giving that reactive attitude to the situation, but as I have discussed previously, there are many objective reasons for why rape is wrong. Again, this could be distilled down in to some form of emotivist meets ad populum.

The above arguments put forward have heavily shaped how compatabilism is seen today.

There are many takes and arguments in this section of the SEP article: https://plato.stanford.edu/entries/compatibilism/#ContComp and I worry I have already loaded on too much information.

As such, I will keep it simple and just add a few quotes from sections that seem the most reasonable to me.

In Freedom within Reason (1990), as well as in several provocative papers (1980, 1987), Susan Wolf develops a theory of free will and moral responsibility that highlights a mesh between an agent’s action and what she (correctly) regards as valuable. For Wolf, free will concerns an agent’s ability to act in accord with the True and the Good. Unlike Frankfurt’s, the conditions of Wolf’s mesh theory require an anchor external to the agent’s internal psychological states (the True and the Good).

Because Wolf’s asymmetrical view requires regulative control in the case of blameworthy actions, her compatibilism is open to refutation by incompatibilist arguments designed to show that determinism is incompatible with freedom involving alternative possibilities. As a result, Wolf argues that physical determination does not entail psychological determination.

This is something I do ponder, whilst I understand a physicalist thinks everything is purely physical, and I will accept that the mind is rooted in the physical (brain), thought experiments like ‘Mary’s Room’ demonstrate how the mind and qualia are something not wholly physical even if they can be explained through physical terms.

Thus, the x-factor I percieve our brains to have could be explained by psychological states not being entailed by physical determination.

An easy rebuttal for this though, is how our minds are shaped by our experience, knowledge, parents, teachers, and every person we interact with. This is true, and why I will now remind you of my ‘Free will Scale’.

So whilst I don’t necessarily agree with everything Wolf says and can see gaps in the argument, I do see the mind as not purely physical, where as the universe is physical. So when we speak of the universe being deterministic, are we speaking purely of the physical properties in the universe?

The most natural way to understand a reasons-responsive theory is in terms of an agent’s responsiveness to reasons. To illustrate, suppose that Frank Zappa plays the banjo of his own free will. According to a reasons-responsive theory, his playing the banjo freely at that time requires that if, in at least some hypothetical cases, he had reason not to, then he would refrain from playing the banjo. For instance, if Jimi Hendrix were to have stepped into Frank’s recording studio and asked Frank to play his electric guitar, Frank would have wanted to make Jimi happy and thus would have gladly put his banjo aside and picked up his electric guitar. It seems, then, that for Frank to play the banjo of his own free will, Frank — the agent — must have regulative control and not merely guidance control over his playing. His freedom must consist partially in his ability to act upon alternatives.

This fits with how I see free will, the ability to reflect on experience and emotion and make conscious choices based on them.

As I mentioned there are other forms of contemporary compatibilism in that article, most are evolved forms of the ‘transitional’ forms of compatibilism, like the Strawsonian reactive attitude account of morality/free will.

In short, though, compatibilism is any theory or argument put forward that shows how free will, and subsequently morality, can work in a deterministic universe.

For a deeper look into free will from a compatibilist’s perspective, check out Dave’s ‘Free Will: A Compatibilist’s View‘ in which he covers off a few of the experiments I mentioned before.