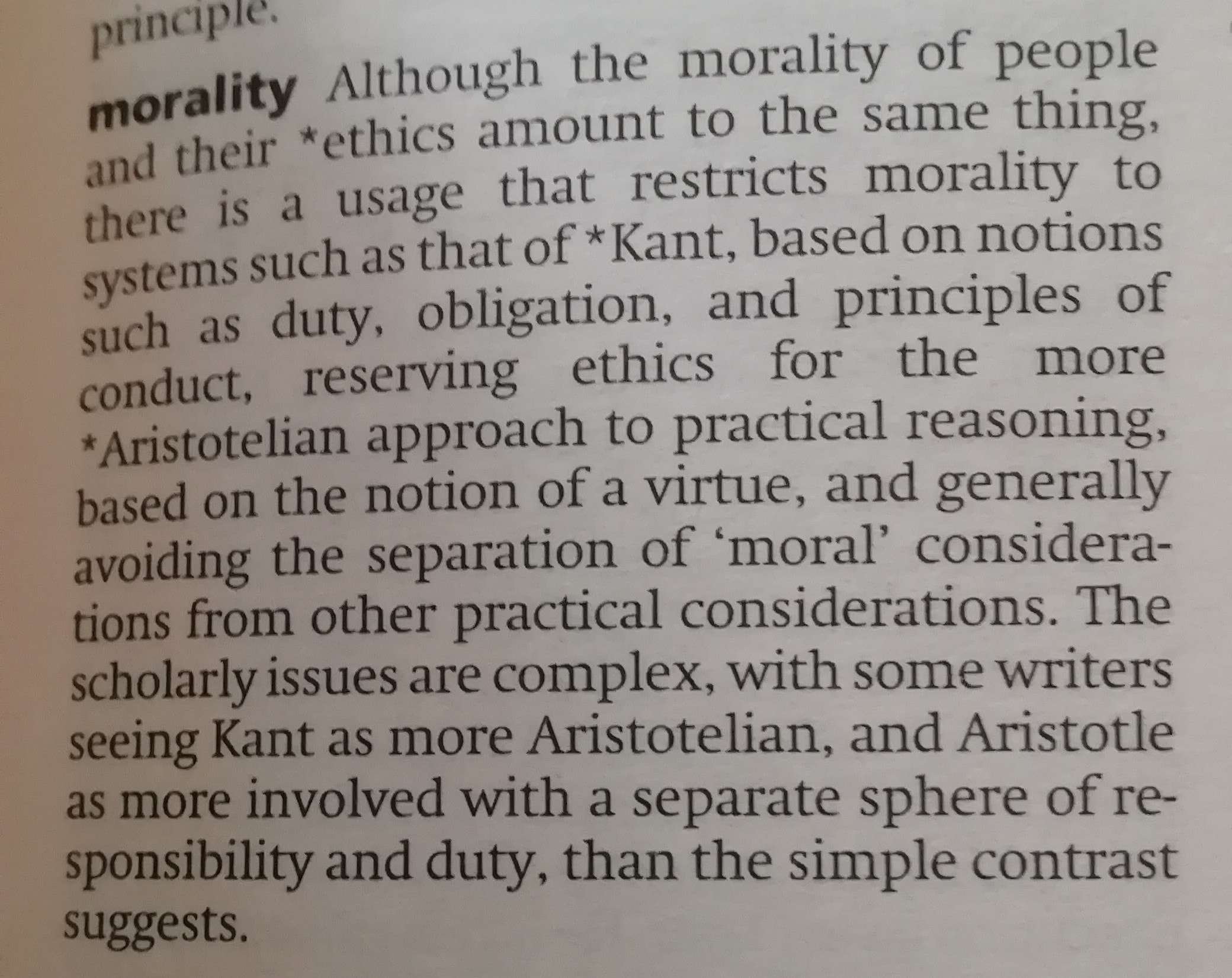 Welcome to part one of the series On Morality.  In this short series of articles, we will cover the topic of objective and subjective morality, how the various terms are used, and the pros and cons for each stance.  This series is a follow on, and supplement to, Davidian’s excellent article on objective morality posted previously, as well as episode three of the Fresh AiR podcast.  This series of articles will expand upon much of what Davidian spoke of, and discuss various ideas in greater detail.  Originally when writing this the intent was to write a single article, covering the basic ideas.  However, as more and more of the argument was covered, the article began to grow to a size that was larger than most people would be probably be willing to read.  So instead of writing one long article, the choice was made to break it down into more digestible sizes, covering each step of the argument in detail.

This is because one of the problems when having an online discussion about morality is that large chunks of the conversation that are necessary end up not happening.  The conversation starts sort of in the middle of the argument, and often happens in a way where those that hold to the idea of objective morality are dogpiled, and expected to defend various accusations without actually getting time to explain the necessary foundations.  Of course, this may still not change anyone’s mind, and there are some that may still walk away believing that morality is subjective.  There is little that can be done about that, unfortunately, but at least this way the argument can be laid out in a deeper way, and certain counterarguments can be gone over in a more formal and more expansive manner.  While the reader may not agree at the end, there will, hopefully, at least be a deeper level of understanding about the arguments for objective morality and counterarguments against subjective morality.  The best place to begin this argument is at the very foundations, and while it may seem tedious to most, some definitions should, and will, be offered first.  This is to make sure that we are all ‘on the same page’ so to speak.  Often times in discussions about objective morality people talk past each other, using different definitions for terms, so it is important first to explain how the various terms are used.

It may seem somewhat trivial to most people, though those that have studied or read philosophy will know that defining terms is pretty standard.  In this case though it is in response to claims made about what the words objective and subjective mean.  We often come across people that misunderstand what those two terms mean, and ironically some of those that misunderstand have also claimed that it is others that misunderstand what those two terms mean.  The first thing to understand here then is that words are polysemous, meaning that words often have multiple meanings.  Objective and subjective are both polysemous words, meaning that in different contexts these words have different meanings [1][2][3].  Many times we come across people arguing that subjective means ‘from a mind’, or ‘of subjects’.  The word subjective does mean this of course, and it would be foolish to deny that. However it would be just as foolish to argue that the word means only this.  Another of the definitions of the word is ‘of, relating to, or emanating from a person’s emotions, prejudices, etc’.

So, as we can see, subjective is a polysemous word, it is a word with multiple meanings [2].  The meaning that is used depends on the context it is used in.  The same goes for the word objective, it can be defined as ‘external to the mind’, or ‘of objects’.  However, the term objective is a polysemous word too.  It does not simply mean ‘external to the mind’ or ‘of objects’, it can also mean ‘undistorted by emotion or personal bias’ [3].  Just as with the term subjective, the different definitions come into play in different contexts.

Here we can see that the words subjective and objective have multiple meanings.  According to one of those meanings it would be true to make the statement ‘morality is subjective’, because morality does indeed come from the mind.  Morality is a concept, and concepts come from the mind.  However, as stated, different definitions come into use according to different contexts, and it is often the case that certain disciplines and fields use words in a different context to how the average person might use that word.  A good example of this is the word theory [4].  The word is used very differently when discussing science to how the average person might use it.  In the case of science, it is often used to mean ‘a set of hypotheses related by logical or mathematical arguments to explain and predict a wide variety of connected phenomena in general terms’.  Whereas in general usage it is used to mean ‘a speculative or conjectural view or idea’.  So, as can be seen, certain disciplines can use a definition that is different to common usage.  This holds true in the case of subjective and objective also, as the words are used to mean ‘based on personal opinion’ and ‘undistorted by emotional or personal bias’ in philosophy, at least in the case of something like ethics.  To say that morality is objective, philosophically speaking, is to say that there are standards of judgement that are independent of personal bias and feelings when it comes to morality.  So to say that morality is subjective, philosophically speaking, is to say that the standards of judgement for morality are based on personal feelings.

There will probably be those that will now argue that the words are being used incorrectly in philosophy, and by philosophers, even after being presented with evidence that the words themselves are polysemous and one of the multiple definitions is the way it is used in philosophy.  It is not only in philosophy that these definitions are used though, one could offer here other disciplines using the words in this way, including science.  However, the easiest way to dispute that these words are being incorrectly in philosophy is to show that they are used in this manner in regular conversation too.  For example, when we describe a reporter, or a judge, behaving in an objective manner, we do not speak of them behaving ‘external to the mind’.  We speak of them behaving ‘without being affected by personal bias or feelings’.  One could also show here examples of things that come from a mind, but would still commonly be referred to as objective.  One such example is that of a fact.  A fact is a proposition that comports to reality, in other words a fact is an accurate statement describing some element of reality.  Facts are also described as objective in nature, with the word objective here meaning ‘not influenced by personal bias or feelings’.  It would be ridiculous to say that a fact is ‘external to the mind’, as facts only exist because of language, and language can only exist in and from a mind.  Mathematics are also considered to be objective in nature, and as with facts, mathematics come from, and exist in, a mind.  Facts may describe things that exist externally to the mind, but the fact itself only exists because of a mind; and sometimes facts also describe states of mind, or thoughts, or emotions.  States of mind, thoughts, and emotions are things that do not exist externally to a mind.  Yet facts are still considered objective, as facts are ‘undistorted by emotional or personal bias’.

With the terms subjective and objective defined and argued for, as well as a definition given for morality, we reach the end of the first part of the series On Morality.  In the next part we will explore the idea of subjective morality.  Thank you for reading, and we hope to see you in the next part!

[6] Stanford Encyclopedia of Philosophy entry on The Definition of Morality: https://plato.stanford.edu/entries/morality-definition/