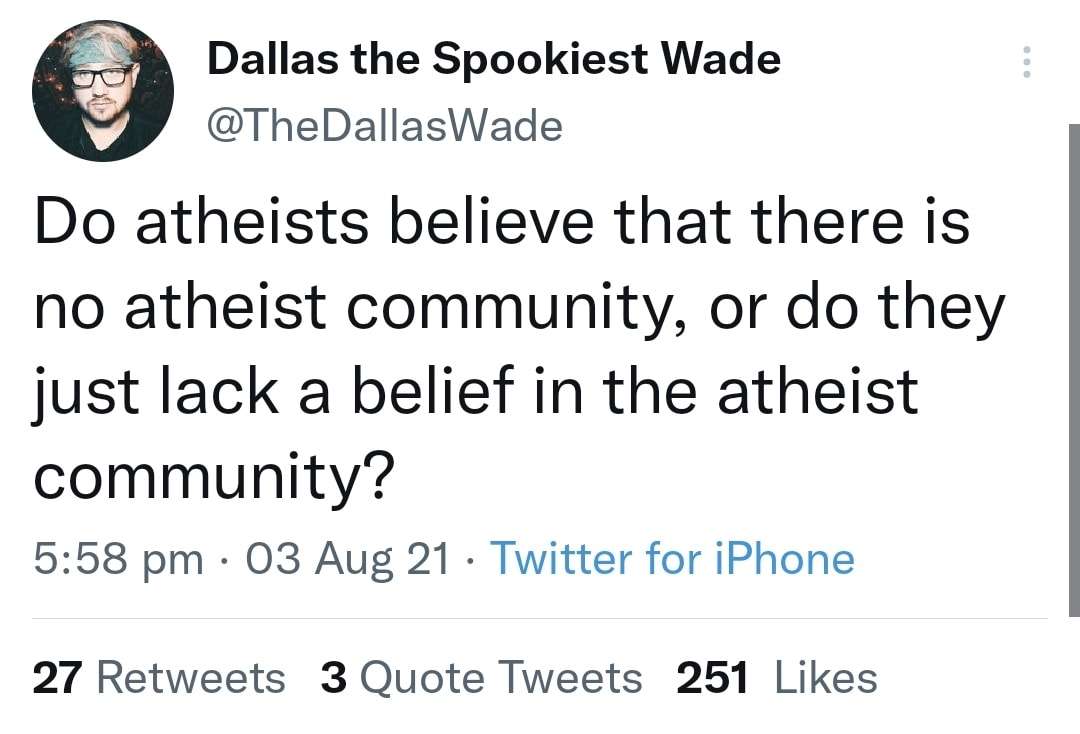 What is a Community?

We can see from the definition that, aside from a group living together, we can see any group that has similar characteristics, attitudes and interests in common would fit.

What is an atheist?

Atheism is polysemous, and even among atheists, there is a disagreement about how this ought to be defined.

There are 2 qualities that do unite atheists though.

On social media we can see atheists acting like a community, often doing these things:

Now the YouTube shows bring me to another point… The atheist experience is produced by The ACA.

What is the ACA?

Even funnier when you’re telling Matt Dillahunty, former president of the Atheist Community of Austin, that there is no atheist community.

There are quite a few “big names” in the atheist YouTube circle, and you’ll find a lot of the same names in the audience, the same popular names promoted around or guests on those channels, and all discussing similar ideas in a similar way with similar conclusions.

It sounds like they have similar attitudes and interests in common, no?

There are many atheist events hosted around the world, from bigger events like atheist day hosted in Texas to smaller events like sceptics in the pub.

These events often have groups they are attached to online, so these like-minded people can continue to hang out virtually after the live event.

You’ll be hard-pressed to find an atheist that hasn’t read something from at least one of them, and they probably follow them on social media.

Another thing to note about communities is they start to build an in-group Vs out-group mentality.

Consider how you might say to someone very much in love with their guns that you think there should be a few more restrictions and checks on the people that want guns, and all they hear is “I want to take your guns” instead of what you’re actually saying.

The same can be said in the atheist community. There are common catchphrases and memes thrown around, but it seems like to be a “free thinker” you have to think like all the other atheists or you’ll be labelled, as we often are as: theist trolls, crypto theists, cult leaders or apologists.

Without a community, this sort of othering can’t actually happen, so it is another indicator that there is indeed an atheist community.

Addressing some comments related to community

Whilst writing this article, which was influenced by a few facedesks of atheists claiming there was no atheist community whilst patting each other on the back acting like they were in a community… A joke from Dallas Wade, Atheist, YouTuber, and all-around decent bloke, popped up in my news feed. There were several responses that seemed to reflect common attitudes in the atheist (non)community.

As I hadn’t published yet, I thought maybe I should address some of the comments in that thread and I had seen elsewhere.

Atheism is not an organisation or religion

Yup, this seems to be a common fear. Apparently, declaring something a community is the same as it being a religion? Also, no one is claiming atheism is an organisation or religion, just that there are atheist communities.

The irony of one of the posts above is that he is responding to Matt Dillahunty. Refer to my earlier comments on the ACA.

Why Would there be a community?

Wendy, your comments about being “normal people” and “brainwashed cult” are completely toxic and something I wish wasn’t present in the online atheist community.

No, but people (the atheists) do. It’s hard-wired into us. Your “default state” argument shows bad epistemology. Again, your comments and attitude show toxicity.

There isn’t an overarching “Atheist Community”

Does there need to be, Mikey? Even in massive organisations like religions, there is very rarely a single overarching community. Why do you think there are so many denominations?

Communities are cliques and atheists don’t feel the need to be in one.

Interesting take Leon. A clique is a close-knit group of people that doesn’t readily allow folks to join them, I am not sure that this applies to a community. Consider the Christian community… they very much are accepting of new members… so how are they a clique? I think what you mean though, is clique like behaviour. Essentially our tribal nature, right?

With the fact that I and other atheists with an above-average interest in philosophy and positive discourse with theists are frequently othered by the online atheist community, it seems like that this fit your definition of being shut out by those unlike them. So, are you saying atheist communities are religion? (I know he’s not, but that is the logical entailment of his statement).

Whilst I don’t disagree that there is a humanist community, I wouldn’t say all atheists are humanists, though many do see themselves that way. In fact, I think you have just identified another behaviour of the online atheist community. They often believe they are humanists.

Communities tar everyone with the same brush.

What, you mean like so many of us atheists do to theists? We argue against a literalist take on the bible and claim that has proved the bible false, or claim theism/religion is a delusion/mental illness? It sounds like you’re afraid that theists will do what we incorrectly do to them.

Again, is every community the same?

People are united by their beliefs, not their absence.

Do you mean like the belief there is no atheist community shared among many internet atheists, and some of the others I mentioned previously?

I do get what you are saying, Julian. Atheists strictly only have one commonality, but our tribal nature has brought us together in various communities and unfortunately, especially online, we’ve ended up with a lot of atheist echo chambers.

There’s so many more too…

There are so many more of these bad takes you see online. It really does puzzle me that atheists are so desperate to not have anything to do with religion/theism that they end up making these awful statements like there is no community or they hold no beliefs.

Whilst I have anonymised these comments, I have felt the need to respond to some, especially the condescending attitude some folks have taken. It’s bad enough when someone is condescending and patronising, but to be wrong at the same time is so much worse.

Thank you Dallas for letting me quote you, hopefully, folks will check you out on Twitter and Youtube!

Whilst there may not be a community local to you, and simply being an atheist doesn’t mean you’re instantly in a community, there are communities of atheists. These communities are mostly online, though are not limited to online exploits.

To say there is no atheist community seems to be a misunderstanding of what a community is.

We atheists have a community, whether we like it or not. In fact, there are multiple atheist communities, just like there are multiple Christian communities. There may not be an overarching set of rules and governance you might find in a religion, but then do you think the black community have these rules either?

Why does there have to be one over-arching community for something to be considered a community? If that was the case, there would be NO communities.

The fact is, there are atheist communities, and if you’re an atheist that tends to debate theists online, whether you like it or are even aware of it, you are in a community.