Home / Atheism / Philosophy / Religion / If there’s no God, why be good?

If there’s no God, why be good? 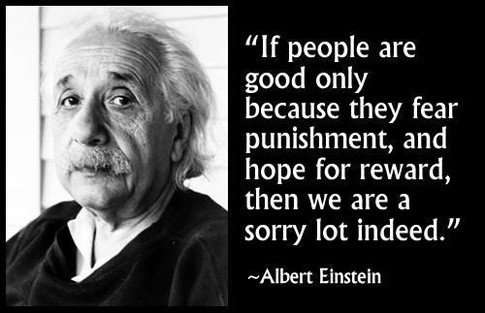 Now think about even the most basic of societies. Two previously conflicting tribes, who have now merged into a tiny little village made of the crudest of huts. Huts just capable enough to protect them from the elements, to store things in, and to have a fire inside for cooking and warmth. For ease of argument we’ll consider this new merging of tribes a population of sixty or so. We could call this extravagant for two newly merged tribes, but we could call it a few generations in if that is the case. Now think about the things that would be included in this minimal ‘state of society’. The shelters, an easy means of lighting fires, the knowledge of storing food, the knowledge of cooking food, the knowledge of building the means of these things, the means of building these things, the social structures. All the physical and non-physical things involved. Now imagine what it would take simply to get from the ‘state of nature’, to this minimal ‘state of society’.

At the very least it would take agreement. For the two previously conflicting tribes to merge, it would at the very least take for them to agree to stop the conflict. In order for this to happen there needs to be communication. Which involves agreement, for what is communication if not agreement that certain things mean certain other things. It would take agreement at the very least that instead of harming each other, and fighting over resources, and land, co-operation was better. Co-operation allows us to have all the things we had in a ‘state of nature’, but more, and more easily. It allows them to increase their happiness, and reduce their suffering.

This simple act of communication, agreement, and co-operation, allows them greater protection from others that may want to steal their resources, attack them, or otherwise cause any kind of conflict. It allows them greater protection from any wild animals that may attack them. By virtue of agreement to stop conflicting with each other alone it has offered them protection from each other. This simple act of communication, agreement, and co-operation, has also now enabled them to exchange skills with each other. If one member agrees to help another member do something they cannot, then that member will help them do something they cannot. By being good to each other, both members have then increased their own happiness, as well as the others happiness. They have also reduced each others suffering. They have made things ‘better’. This simple act of co-operation, agreement, and communication, also enables them to teach each other new skills. It enables learning. Which in turn enables us to pass on our knowledge to the next generations, as well as others who may be able to offer advice on how to improve on our knowledge. For it cannot be argued that we all have the same amount, and level, and ability, when it comes to knowledge. We each hold ideas, and skills, that those next to us may not hold. In essence, in order to fully utilise those skills, we need to share them, and to work together, to communicate, and agree.

It is this sharing of skills and knowledge that would get this small, newly merged tribe, to shelter, and the storage of food, and minimal agriculture, and fishing, and to point where these humans have overcome nature and adapted to its own end. To a point where these humans have left the ‘state of nature’, and entered into a ‘state of society’; however minimal that ‘state of society’ is.

Here is where we can say, and see, that God is not a necessary reason for us to be ‘good’. For at no point in the argument has mention been made of the beliefs of these two newly merged tribes. One could argue here of course that God was the necessary component to merging these two tribes together, and this is a valid point to raise. However, the same could be achieved by two tribes believing in different gods, so long as those two tribes agreed to communicate, and co-operate, and to live in peace with each other, and to help each other out, and to share skills and resources. So God need not be a necessary part of why we should be ‘good’, it need only be a contributing factor. The necessary component is the agreement of the sharing of skills, knowledge and resources, and of peace, communication, and co-operation. The necessary component can be summed up as ‘the well being of ourselves and others’.

It may seem strange to some that our own well being and happiness is intertwined with not only others, but that of our community, and our society, and our country, and the world. For we as atheists are often confronted with questions like ‘if there’s no God then why not rob and steal and rape and kill?’ To which we can think a few things. That the person has been taught to think like this, and hasn’t really thought of their position too well and too critically. That the person does not care about their own well being and should be helped. Or that the person is not someone who should be among society. However, it is still something that needs to be addressed in order to confront criticisms.

For criticisms like that we need only think of how many social interactions we make each day, and how many people we rely on, in order to have what we have today. Think not only of those close to us that we rely on, but think at a community level, a society wide level, a country wide, and even a worldwide level, in order to have the things we have. Think back to the mention of the sharing of skills, and how we need to co-operate in order to have these sharing of skills. If everybody did these things, then the people that are relied on at the wider level may not exist to support the infrastructure. Think of what may happen in the society we have today if suddenly all those who run the nuclear power plants were killed. Or all the nurses, or all the doctors, or all the police. Now think of what it would be like if all those close to you were killed. Or raped. Or robbed. Now think of what it would be like if all of these things happened to you.

If everybody agreed that these things were acceptable, then we would soon be returned to a state of nature. We would lose everything we have gained today. In fact, the further we go ahead, the more we stand to lose if we all agree to just do whatever we want, and disregard each other’s well being. You lose by causing another to lose, you gain by helping another to gain. There will always be those who decide to go against this of course, and these people should in some way be removed from society, and have the benefits of society stripped away from them to a certain extent.

1 Response to If there’s no God, why be good?