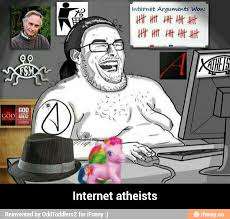 I cut my teeth in online debates in a group called does God exist(DGE) on facebook about 3 years ago. I had been an atheist for a long time but was not active in it in any way.

I married a Muslim woman and she tried to introduce me to Islam. Her family showed me the nice early Meccan verses and I thought, “well this is not so bad at all!”. I then read Quran for myself, then I read it again because I was not so sure how anyone could buy into it. 3rd time of reading I figured  it was time to take to the internet and see what other people think.

I went to Islamic apologist sites, then went to anti-Islam sites to try to find a balance between each ones propaganda. I looked at the premises and explanations(tafsir) put forward by the apologists and applied logic and reason, it just didn’t add up. I looked at the logic applied by the anti-Islam proponents and they made quite clear the hate speech and sexism and violent passages of Quran and hadith. I took to the Facebook groups and watched debates from afar for a while before daring to ask a question or make a statement. During this time I was also attending Madrassa with my 4 Muslim step children. What the Madrassas were teaching and what Muslims were saying in public were not the same. We changed Madrassa 4 times as we didn’t think it was right to teach the children non-Muslims were dirty and Jews were not to be trusted, nor Christians. This was the message conveyed in my experience in these small groups. No tolerance for Kufr.

The Debate Groups and their spin offs

Anyway, back to the debate groups. As I said, I watched from afar and saw some really pointless exchanges in many groups. Groups that were badly moderated, people just name calling towards each other and Muhammed. I am no fan of Mo but trying to rile someone by offending them is not winning a debate or discussion. Maybe that works for some people but it wasn’t for me.

I stumbled in to does God exist by chance(yes theists, things do happen by chance). I found a group of very intelligent atheists that actually engaged and supported claims with links to prove points. Theists were usually overwhelmed and couldn’t debate for long. I would follow the links and try to absorb the content. I would click other links on the pages and learn more on perhaps biology or physics, sometimes philosophy or maybe refresh my theology or bible quotations. This started a huge learning curve, one which is still curving today and my thirst for knowledge just grows and is fed by the articles posted on my new found atheist friends walls and groups they have started or post in regularly. The information sharing and genuine thanks given to each other in comments for sharing knowledge is heart warming. We have groups like Space Invaders, The Science Lounge, Cosmos: A Space Time Odyssey and Knowledge Is Beautiful contributed to regularly by many of the atheists I see debating theists in the groups I frequent. Debating groups such as DGE and Debate Faith, Atheist & Christian Debate. Oh and not forgetting my little intimate Atheist Resource Group. 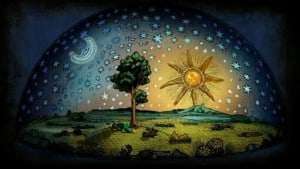 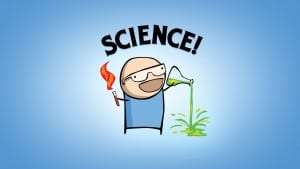 Now don’t get me wrong, there are aggressive debaters in all those groups who seem to just want to offend but there are a regular crew of long time members that actually take the time to try to correct theists when they misrepresent something in science. These theists have gone to a religious site and have been fed pseudoscience or been presented with “logical arguments” for their gods and have fallen hook line and sinker for the half truths or just outright lies fed to them by someone trying by any means necessary to further a justification for their worldview which is based in ancient superstition or myth. Others have been fed information since childhood by their parents and it is only natural to accept at a young age what your parent tell you is truth as just that, usually without question. when they see the pseudoscience or arguments presented on the faith sites it acts as a confirmation bias supporting their preferred belief. It can be difficult to get through to people and convince them that the science we are presenting is real, yet they only seem to challenge the science which goes against their worldview. coincidence?

Back to the internet atheists. I can only thank the unsung heroes of logic and reason for the knowledge they have passed on or for pointing me in the right direction in where to look for more information. Keyboard warriors or hobbyist scientists, it matters not. I have been called both over the years. Theists actually believed it was a derogatory term but my hobbyist real science knowledge trumps your incorrect strawman science any day. I now possess the ability to correct misrepresentations of science and can attribute this to my peers in the debate groups. For this I thank you.

All the writers and editorial staff here on www.answers-in-reason.com have met in these very groups. Again I am honoured to be in their virtual presence as I have learned so much from them over the years and am flattered to be considered to present articles which will be published next to their writings, and the biggest thanks is for correcting me when I get stuff wrong. A hard pill to swallow but always appreciated!!

One of the highlights so far

Last Wednesday evening(March 9th, 2016) I had the great pleasure of meeting my fellow admin from DGE and founder of www.answers-in-reason.com, Christopher Pyke in the flesh. We met up to attend an Aron Ra talk just outside London. We were invited by the hosts Wycombe Skeptics in the Pub, and with Aron’s permission, up on stage to give a quick promo of ourselves. They also graciously projected our site to the big screen for all to see. This was most unexpected but very very much appreciated. Not really what the theists portray an atheist as, that being selfish and immoral. Nihilistic in worldview. Lacking respect and abusive. 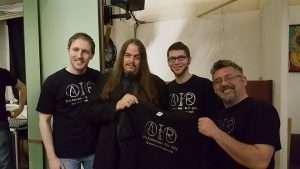 This article is homage to you good folks that have not tried to suppress knowledge and have helped form the debater/writer/skeptic/humanist/atheist and generally well rounded man I am today. You truly are inspirational!!

To you all I raise a glass and send my warmest thanks!!

Then something like this comes along and makes it all worthwhile. 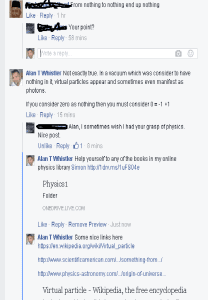 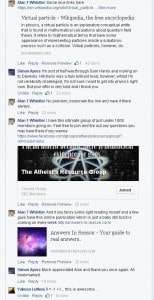