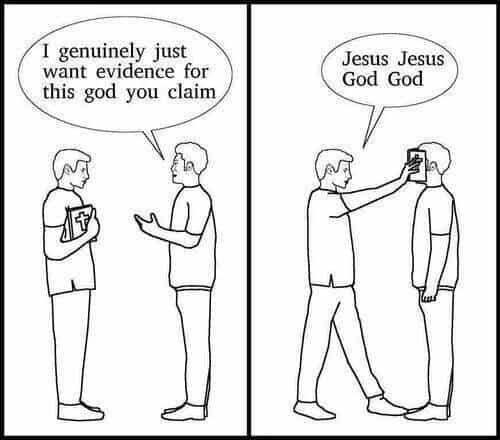 “My argument against god would collapse too”

Your argument was flawed from the get go, so no wonder it collapsed. 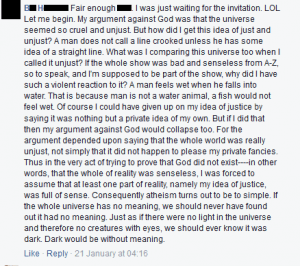 “…I was forced to assume that at least one part of reality, namely my idea of justice, was full of sense. Consequently atheism turns out to be too simple”

What an unbelievably tenuous link. The universe is unfair, unjust, doesn’t make sense, but you have a sense of justice, which does make sense, therefore atheism is too simple?

Just read that back to yourself.

“If the whole universe has no meaning, we should never have found out it had no meaning”

What sort of fancy brain gymnastics is that? That’s like saying if Trump really was a bigot we should never have found out that he was a bigot.

“Just as if there were no light in the universe and therefore no creatures with eyes we should ever know it was dark. Dark would be without meaning”


Darkness is the absence of light. It has no meaning.
If there was never any light we may not have the words Dark and Light because there would be no comparative, but that in no way goes to prove Gods existence.

For whatever reason you are searching for meaning, it would suggest something is lacking from your life.

To give it meaning you submitted yourself to “God”. This gave it meaning. God has a plan for you. This takes any responsibility away from you, your life, and your decisions that led you to a point where you feel everything is without meaning.

The afterlife gives you hope of a better life than the one you have.
Rather than work on this life, you are waiting for the next.

I have no issue with what you believe. People do what they do to get themselves through this life. The lack of logical and objective reasoning bothers me. The assumptions with no basis bother me. The referring to things as evidence erroneously/lack of understanding of what evidence is bothers me. The “life needs meaning, therefore God” bothers me.

The reason it bothers me is because none of what you have said actually makes any real sense. There was no logical thought process that lead you to believe in God, it was just an emotional response to something missing in your life. You have done mental gymnastics to try and make your belief seem logical, but there is nothing logical about it.

Regardless, thank you so much for your time, I do wish you all the best, and that your life improves for you.

Throughout the conversation BH didn’t really listen to me, frequently glossing over points I made, or rebuttles to his statements continuing to make the same mistakes. He spoke about evidence, and then provided none. His claims were biased and unfounded. The conversation seemed to go the way most conversations with theists do. He has since come back and continued the conversation but since asking for evidence (again) he has not replied. Conversations with theists often go that way as theists cannot handle being quizzed on their beliefs or asked for evidence. The issue is, there is none. Sure there are “feelings” or anecdotal experiences, but we are left pretty empty with those. They are not testable.

Theists are often so strong in their belief of God they do not realise that they are not really making any sense. They feel so strongly that their statement about their belief is the “definitive truth” and objective “evidence” for God’s existence. If you question that belief, they often take it as a personal attack.

It is important to remember never to attack the person, even if they seem foolish. The belief, the comments, the “evidence” provided are all fine targets, though consider how you word things.  If it starts getting personal it will just turn in to a flame war and you will never get anywhere. Occasionally you learn something new or can actually convince someone to see reason!

I didn’t really learn anything from the conversation above. BH’s story and reasons for becoming a religious theist seemed incredibly vague and “wishy washy”. When I didn’t accept his anecdotal evidence and requested something genuine he gave up saying, “Evidence to you means nothing, for you seek no evidence. Not seeking evidence eliminates any possibility for critical thinking. Only an atheist, not an agnostic, does not’ seek’ answers to life.“

The irony of the statement made me laugh