The parameters for life are so finely tuned that if they were tweaked ever so slightly, all life would cease to exist, and the universe would be too hostile for life, if it existed at all. Therefore, there must be a god who fine-tuned everything. But is the universe fine-tuned for life?

In 2014, a major coalition of creationists got together and released a video called the Privileged Planet. I remember watching it as a Christian kid and not seeing anything wrong with it, but after spending the last few years thoroughly immersed in science, I can take an objective look back on the video.

One scene from the Privileged planet indicates that the earth’s orbit is so finely tuned, and if it were just 5% closer to the sun, or 20% further away, life could not exist on our planet. But while 5% and 20% don’t sound like much, that window is 37,399,000 km wide, and the earth’s orbit isn’t a perfect circle. It varies wildly in its distance to the sun. Its closest point, or perihelion, and farthest point, aphelion are 5 million kilometers different from each other in terms of solar proximity!

With over 100 billion galaxies containing 100 billion stars, many of which have multiple planets – ours has at least 8 (sorry, Pluto) – it’s not surprising that in just the few years that we’ve had telescopes and methods to detect them, we’ve discovered thousands of exo-planets with estimates of as many as 40 billion just in our galaxy that are orbiting around a star in the life-sustaining, habitable zone.

Allow me to paint a picture for you of what a universe fine-tuned for life might look like:

Every star would be surrounded with multiple, habitable planets – each in perfect equilibrium. They wouldn’t have to have shifting tectonic plates causing earthquakes or volcanoes. No dangerously sporadic weather conditions would exist, and we would be impervious to UV radiation, if it existed at all. There would be a higher ratio of land to water, and a greater percentage of the water would be drinkable. The requirements for human life wouldn’t be so minuscule and tiny. We would possibly even be able to survive in outer space and explore it with ease. And while this type of universe may not be able to operate on its own according to our current laws of physics, it wouldn’t have to, because it would be held in place by god. The very fact that our universe always adheres to physical constants and operates so well on its own is proof in itself that god is superfluous.

We live on a tiny rock, hurdling around a massive fireball at death-defying speeds, in the vacuum of space. Our planet is bombarded by meteors and asteroids, encompassed with natural disasters, and has undergone at least five known mass extinction events. Our primary source of light and energy gives us cancer. Only a fool would say that this planet is intelligently designed. Only a blind lunatic would call it fine-tuned for human life when everything around us is trying to wipe us out.

But even though it’s not fine-tuned for life, the parameters for life aren’t nearly as narrow as we once thought. In the 19th century, it was speculated that man could not survive speeds greater than 50 miles per hour. To show just how laughable that assumption is, astronauts on the Apollo 10 reached speeds of 24790 mph. Creationists think the window for life is so tiny, but let’s take a look at the tardigrade.

JUST TRY AND KILL ME!

This little guy can survive temperatures as low as -328 degrees Fahrenheit (-200 Celsius) and as high as 300 degrees Fahrenheit (148.889 Celsius). Radiation? No problemo! They can take doses a thousand times the lethal dose for humans, and can live on in pressures 6000 times greater than that of our atmosphere. We’ve even found bacteria that can survive in outer space.

The fact is, we just don’t know what the limits of life are. We’ve adapted to this planet, but the requirements for life in other circumstances may be broader than we ever thought possible. If we had been born on a hotter planet, we would have likely evolved from thermophiles and would have evolved better cooling mechanisms or internal systems that thrive in heat. Would you then say that that planet is so fine-tuned for life?

But what about the constants of the universe?

Creationists often point to the gravitational constant stating that if it varied by just 1 in 10^60 parts, none of us would exist. But here’s what an actual physicist, Dr. Sean Carroll, has to say about it:

“There’s a famous example that theists like to give – or even cosmologists who haven’t thought about it enough – that the expansion rate of the early universe is tuned to within one part in ten to the 60th. That’s the naïve estimate, back of the envelope, pencil and paper you would do. But in this case, you can do better. You can go into the equations of general relativity, and there is a correct, rigorous derivation of the probability. And when you ask the same question using the correct equations, you find that the probability is one. All but a set of measure zero of early universe cosmologies have the right expansion rate to live for a long time and allow life to exist.”Sean Carroll PhD

Another example creationists like to give is the expansion rate of the universe (driven by the cosmological constant). They claim that if its value was altered by just one part in ten to power of 120, the universe would have expanded too rapidly or too slowly. But Physicist Lawrence Krauss has a different perspective:

“One of the worst fine-tuning problems in nature, which is one of the ones I first proposed – the cosmological constant problem… That looks like it’s incredibly fine-tuned – 120 orders of magnitude – the worst fine tuning problem in nature, and Dr. [William Lane] Craig will jump up and say, ‘Look, if it was a lot bigger we wouldn’t have humans.’ Well it turns out, if it was precisely zero, which is a much more natural number, more life would form.”Lawrence Krauss PhD

What about the electroweak force? Well it turns out, it appears fine-tuned, if that’s the only value you’re permitted to alter. But work by Dr. Harnek and colleagues has demonstrated a perfectly viable universe when allowed to tweak other parameters simultaneously, even in the complete absence of the weak force altogether. And if you’re concerned with probability, there’s no reason to assume that the universe hasn’t been expanding and contracting for eternity or that our universe isn’t one of many – each with its own starting conditions.

WHAT YOU SEE ISN’T ALL THERE IS.

The Cosmological Natural Selection (fecund universes) theory by physicist Lee Smolin posits that black holes may be the way that universes reproduce – each new universe having slightly different physical constants. If that’s the case, and there’s an infinite number of universes, then even if the creationists’ assertions about the improbability of life were true, probability would be irrelevant. Because even if the chance of life was really one in a trillion-trillion then with more than a trillion-trillion universes – each with different physical constants – our existence would be a statistical necessity. But rather than our universe being fine-tuned for life, it would be fine-tuned for the formation of black holes, which given the prevalence of black holes, it certainly appears to be. The universes that don’t produce black holes would die out, and the ones that produce the most would become more common. The fact that some of the mass formed would evolve into human life would be but an inconsequential by-product.

We inhabit an incomprehensibly tiny spec, floating through vast emptiness and chaos. Are we really so arrogantly egocentric as to look up at the night sky and assume that it’s all made for us? Is that really a crutch we need to make it through the day? If a God did make this earth for us, then she created an almost impossibly small and dangerous place for us to live.

Starting in extreme conditions, humans and our ancient, non-human ancestors adapted to this planet as it cooled. Those of us who couldn’t live long enough to reproduce, were lost along the way. We have evolved to survive here, fine-tuning ourselves to this planet, not the other way around. We have fought tooth and nail to get to where we are. That’s all the more reason to cherish this life and not squander it or destroy the only home we have.

If you like this post and the video accompanying it, please consider becoming one of my patrons by pledging a dollar or two per video on Patreon.

With Thanks to Holy Koolaid

This article has been reposted on behalf of and with permission from Holy Koolaid.

The original article can be found here: http://www.holykoolaid.com/angry-atheists-or-concerned-citizens/

You can also find Holy Koolaid on Youtube: https://www.youtube.com/channel/UCzvoUDoDu-cKIb11rg4ODDQ
Don’t forget to show the guy some love on twitter too: https://twitter.com/holykoolaid 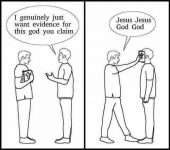 Morality, meaning and values- how evolution explains everything Biology 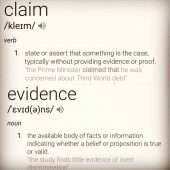 How good is your evidence for god? Atheism

A universe of gods- can science prove god exists Religion 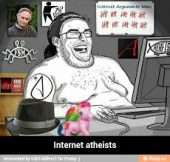 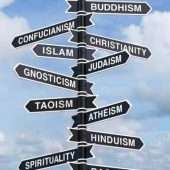 Logic, And Why God Isn’t The Answer Atheism

Our Links
🏠 » Religion » Christianity
a