How did the Dinosaurs die out?

In the previous section the creationist said the great flood wiped out most of the dinosaurs and humans hunted and killed the rest. The below is another “gambit” used by creationists:

I know. Ridiculous right? Not only does it make baseless claims like “many homosexuals are serial killers” – which is about as valid as saying all murderers have drunk water, therefore water causes people to be murdered (I cover correlation briefly in my “Trust” article) – but it goes on with more homophobic comments saying dinos/homosexuals were/are fueled by Satanism, violence and sodomy. I’m almost speechless.

All I can say is, only a lack of education/intelligence can make you believe this.

How does the Sun “burn”?

This is just silly, and a profound lack of understanding. This person clearly didn’t even look it up.

Simply click this link to find loads of answers on this: http://bit.ly/UXBPBp

The Sun does not “burn”, like we think of logs in a fire or paper burning. The Sun glows because it is a very big ball of gas, and a process called nuclear fusion is taking place in its core.

The person above was told as much on his tweets and the response was this:

“Anyone with a functioning brain knows the sun is on fire. Shut up with this nuclear fusion crap. Scientists can make u libs believe anything.”

Why trust “mainstream science” when we have the bible, the best science book of all?

Filling the gaps with “GOD DID IT” does not get you anywhere – god may well have done it but you have to get to that conclusion through repeated testing and exploration.

The bible is not scientifically accurate at all, it is a metaphor, a story, it is not science, and it is not the literal word of god.

There is no evidence of either, so I’m not sure how I can explain their existence. Education teaches us the methodology for testing the evidence, but we need the evidence first!
The closest thing I can think of on this planet to daemons are creationists, because every day with their BS “theory’s” makes more and more people turn away from God.

What does the bible say about gender equality?

I rarely see Christian women acting this way, and that is a good thing. Women and men are equals. Yes there are differences between gender, but no man or woman should have more rights than the other.

I would challenge the validity of this and ask where the proof came from.

Probably proof like in the bible? You know, it was written there for it is true… just like anyone who reads this owes me £50 and has 30 days to pay or Satan will shove his hand up where the sun don’t shine, tickle their heart so you die laughing whilst coughing up and eventually drowning in your own blood. What? It’s true because it says it’s true right here.

So whilst these people are potentially quite bright, they have not had the opportunity to learn and develop their minds and critical thinking/reasoning skills. Instead, kept in the dark in case anything they learn throws their faith into question.

This to me seems bitterly terrible. If their faith is so week that a few FACTS could wreak it, then it is not worth having. Unfortunately this whole thing creates ignorant people, who say these stupid things that make people who might actually be on the search for answers turn away from them and their faith.

Would God really love them any less if they did believe in evolution, or that the world was older than 6000 years old? Are these really the details that prevent one getting into heaven? – Imagine being at the pearly gates, speaking to St. Peter

“Welcome my son, your journey in the physical world has ended, how do you feel you lived your life?”

“Well I dedicated my life to Christ, helped the poor and suffering, tried to get those with alternate lifestyles to see the light, I protected my family and taught them the ways of the lord, I gave more than a tithe every month to my church, as well as volunteering in soup kitchens, and even when the recession came and we lost our house and ended up on the streets we didn’t lose our faith because we knew the Lord was looking out for our souls.”

“I see, well it does look like you have led a very good life, accepted Jesus into your heart, followed all the values, you would fit well with our other guests… but tell me this, how old is the earth?”

A button is pressed, trap door opens and Peter starts laughing as you plummet to hell

“What a moron,” he scoffs, “All the evidence of an old world, ancient civilisations, dinosaurs in fossil layers and everything else has been put there to test your faith, and you failed! TO HELL FOR ALL ETERNITY WITH YOU!”

Do you really think your God is the sort to punish you for all eternality just because you accept the evidence of a few scientific facts and theories?

If education, logic and reason is the enemy of faith, then I doubt your faith is really worth having.

An exposé on Jesus, the so called Christ. Christianity 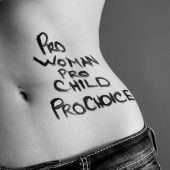 Pro-Choice does not mean Pro-Abortion Biology