Faith Healing: Miracle or dirty scam preying on the desperate and gullible? 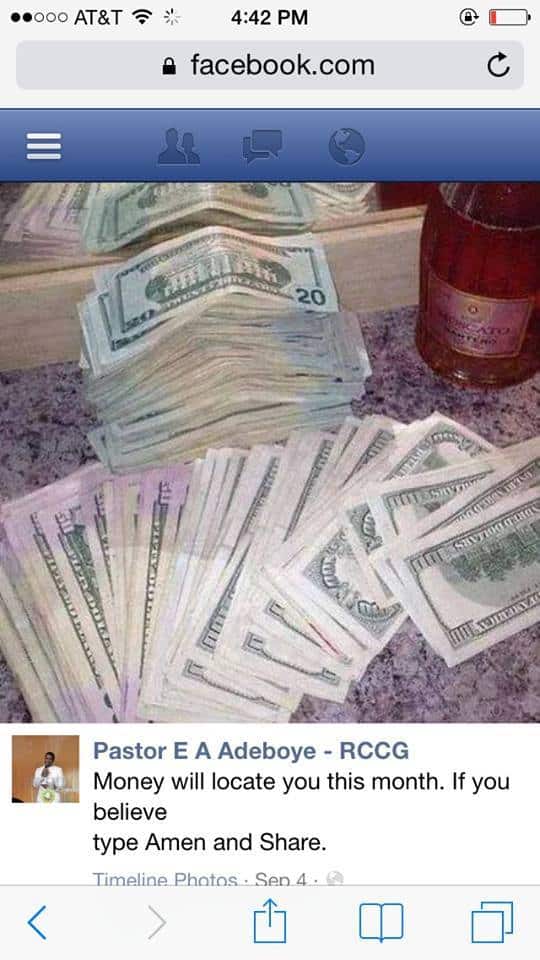 My money is on faith healing being a dirty scam preying on the desperate and gullible but I guess I had better not just leave it at that and present some kind of reasoning behind my conclusion.

The James Randi Million Dollar Challenge. Job done!! Hmmmm, it would make for a very short article if I left it at just this, and I guess I should present a couple of premises just to add weight so let me digress.

We can start with the wonderful James Randi. Here is his bio from Wiki:

James Randi (born Randall James Hamilton Zwinge; August 7, 1928) is a Canadian-American retired stage magician and scientific skeptic who has extensively challenged paranormal and pseudoscientific claims. Randi is the co-founder of Committee for Skeptical Inquiry (CSI) and the founder of the James Randi Educational Foundation (JREF). He began his career as a magician under the stage name, The Amazing Randi, and later chose to devote most of his time to investigating paranormal, occult, and supernatural claims, which he collectively calls “woo-woo”. Randi retired from practicing magic aged 60, and from the JREF aged 87.

Although often referred to as a “debunker“, Randi has said he dislikes the term’s connotations and prefers to describe himself as an “investigator”. He has written about the paranormal phenomena, skepticism, and the history of magic. He was a frequent guest on The Tonight Show Starring Johnny Carson and was occasionally featured on the television program Penn & Teller: Bullshit! 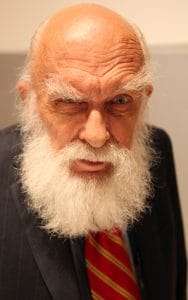 Prior to Randi’s retirement, JREF sponsored the One Million Dollar Paranormal Challenge, which offered a prize of US$1,000,000 to eligible applicants who could demonstrate evidence of any paranormal, supernatural or occult power or event under test conditions agreed to by both parties. The paranormal challenge was officially terminated by the JREF in 2015. The foundation continues to make grants to non-profit groups that encourage critical thinking and a fact-based world view.

Randi’s One Million Dollar Paranormal Challenge was somewhat swamped by crazy claimants so they had to eventually limit it to well known personalities in the faith healing, TV psychic world. There were very few takers, Yuri Geller had a few attempts but strangely under controlled circumstances he was never able to perform his psychic acts. Randi’s people reached out and directly invited several other personalities such as “psychics” Sylvia Browne, Leigh Catherine (aka Leigh-Catherine Salway), Rosemary Altea. They all accepted but then failed to make it happen. One cited as saying, “As expected – dodgy as legally & set up to make it impossible to pass!”.

No faith healers were up to performing their “miracles” under Randi’s clinical environments. Zip, zero, diddly squat, nada and none!! If the mountain won’t come to Mohammed then Mohammed will come to the mountain, and that is just what Randi did. He used his investigative skills to expose several high profile charlatan faith healers Including A. A. Allen, Ernest Angley, Willard Fuller, WV Grant, Peter Popoff, Oral Roberts, Pat Robertson, and Ralph DiOrio. He reported his findings and debunking in his book The Faith Healers which had the added bonus of a foreword by the great Carl Sagan. He went on to expose the likes of Peter Popoff, James Hydrick. You can see videos here relating to Yuri Geller,  James Hydrick and Peter Popoff by clicking on their names.

And it is not just James Randi exposing these con men. The TV show Inside Edition expose Leroy Jenkins, ABC News have run reports on PrimeTime Live exposing W V Grant. Grant for instance relies on the fact that religious people wish to preserve the illusion and dont want to give him away. He will grab up a cane next to a member of the audience and tell them not to use it and to run up and down the aisle. The cane will however belong to the person next to the runner and the runner actually has a wrist problem. He will seat walking audience members in wheelchairs and get them to stand and walk, just in case he has agents and confederates in the crowd.

Here we have a full length documentary by Derren Brown called Miracles For Sale where he shows the tricks used by “healing pastors” and how easy it is to trick the gullible. This is a multi-million dollar industry, make no mistake about it. Video here

So far I have just mentioned US faith healers, I have been given a handful of names of some Nigerian pastors fleecing the believers in West Africa with promises of blessed handkerchifs being able to raise the dead. This is the claim of Pastor Enoch Adeboye. The internet is awash with Christian websites warning their congregation not to give this man money. Here let me google that for you . 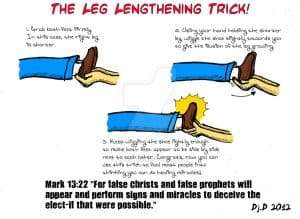 Tricks of the trade

Healing blindness and deafness is usually partially sighted people of hearing impaired being asked if they can hear or see. Truth is they could hear and see what they were asked to before the “healing”

Healing the lame is the charlatan grabbing the walking stick of the person next to someone that is not lame and getting the afflicted person to walk or run in the aisle.

Pastor giveth, pastor taketh away is when a healer tells a believing member god told him that the member had cancer but he could cure it with his healing hands. Then when the member is tested for cancer some time later he has a “miraculous” bill of clean health.

Hired stooges are employed to fake illness or disability

Psychic surgery is sleight of hand and chicken guts

Causing pain to a believer and specifically talking about this pain as opposed to the pain they are afflicted with usually. Then releasing a grip which is causing the pain and asking if they still feel the caused pain.

The falling faithful is achieved through suggestion. Hypnotic states induced through induction. Repetition of phrases and so on.

Quite obviously on the part of the believers it is desperation to save them from terminal illness or crippling pain. One can understand their desperation, but why do they believe it works? 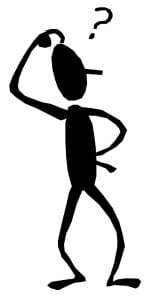 There are several reasons we will look at:

In my article The Science of Belief I went in to some detail regarding the release of chemicals.

We just need look to the ancient Kung San tribe from Africa or the Australian Aborigines. Homo sapien religious ritual can be traced back to these 2 ancient people’s. Stemming from very different parts of the world yet their rituals share striking similarities, song and dance and trance like states. Activities which engage some of those previously mentioned powerful brain chemicals. The birth of religious fervour, throw in a crowd and you have group fervour. Serotonin and dopamine are released in these activities. More so if we are engaging in movement, the more strenuous the more will be released. Pleasure responses in the brain firing like crazy. Lets add some epinephrine, norepinephrine, endorphines and finally some oxytocin, the love chemical. The chemical released in great amounts at childbirth which help the bond between mother and child.

These chemicals are natural pain killers. 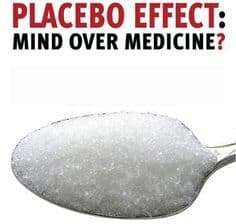 Today, we know that patients who are given empty injections or pills that they believe contain medicine can experience an improvement in a wide range of health conditions.

This kind of fake or empty medicine is often called a “placebo”, and the improvement this causes is called the “placebo effect”.

One well-known example of the placebo effect involves a physical feeling we are all familiar with: pain.

In 1996, scientists assembled a group of students and told them that they were going to take part in a study of a new painkiller, called “trivaricaine”.

Trivaricaine was a brown lotion to be painted on the skin, and that smelled like a medicine. But the students were not told that, in fact, trivaricaine contained only water, iodine and thyme oil – none of which are painkilling medicines. It was a fake – or placebo – painkiller.

In this example, expectation and belief produced real results. The students expected the “medicine” to kill pain; and, sure enough, they experienced less pain. This is the placebo effect.

Read a summary of the study: Mechanisms of Placebo Pain Reduction. – Courtesy of NHS UK

I cannot blame someone that has lived a life in pain or with a disability trying anything at all. I can blame the charlatans that wilfully take these poor individuals money knowing full well they can not cure them.

The believers hold the pastor as a trusted authority figure and do not question his abilities.

In this article Sorry, I’ll Pray for you my fellow contributor Davidian lists some of the dangers of inaction relating to not seeking medical attention due to illogical beliefs.

So there are some liars, cheats, con men and charlatans which have been exposed, but this obviously doesn’t mean all are, however we just need to ask a few simple questions to throw light on the matter.

When will one of the healers cure an amputee?

When will one cure someone under strict lab conditions?

When can we expect healers to go to hospitals and cure the sick for free?

When can we expect them to rush in to areas with outbreaks of Ebola or similar?

Why do faith healers head straight for the hospital when they are afflicted by a health problem?

Until we see them attempting some of these tasks I would say we can deduce they are not miracle workers and merely dirty scam artists preying on the desperate and gullible.

Please, please
Spreading his disease
Living by his story

Knees, knees
Falling to your knees
Suffer for his glory, you will

Chain, chain
Join the endless chain
Stinking by his glamor

Fame, fame
Infection is the game
Stinking drunk with power, we see

Make a contribution
And you’ll get a better seat