God and the Infinite Regress 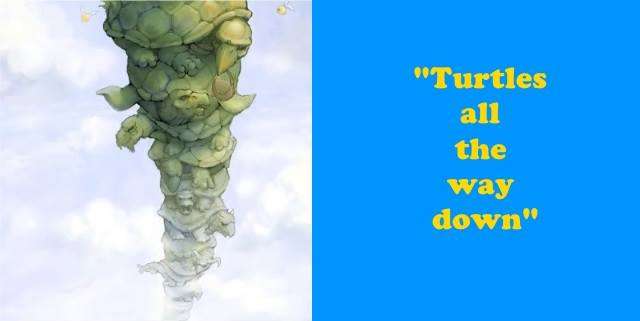 “It’s turtles all the way down”

One of the many arguments put forward as evidence for the existence of God is that of necessity. That God must necessarily exist in order to explain and overcome certain questions and problems regarding existence. The problem of ‘infinite regress’ is one such problem for which God is posited in order to overcome. So what is the ‘infinite regress’ problem?

The ‘infinite regress’ argument posits that we cannot have an infinite amount of preceding events or causes. For if we have an infinite amount of preceding events then we can never get to where we are now, that there must ultimately be a ‘first cause’ or ‘prime mover’. An example that has been used to explain the problem is that of the soldier waiting for orders to fire.

Well if we simply declare God as the answer, then yes it does overcome these problems. If we simply say ‘God is the first cause’ then we have overcome ‘infinite regress’. However, upon closer examination of the claim we are drawn back to some of the same questions and problems that cause creationists to posit God as the answer.

We immediately come to a problem when we consider what God was doing before creation. For when we raise the question of what God was doing before creation we are led into an ‘infinite regress’. The problem comes from some of the attributes assigned to God by creationists, especially those assigned to God by Christians and Muslims. So what are the problems?

If we consider it like this, the moment before creation God would have been creating the universe. We can ascertain that simply because the event could not happen before God performed it. Which means that the moment before that God was deciding not to create the universe. The moment before that the same thing; and so on, ad infinitum. We are simply caught in infinite regress. If a moment is decided arbitrarily that God could have begun from then we are left with the question of ‘What created that creator?’.

To overcome this there are those that claim that God ‘exists outside of time’. However, to me this feels like something of a non-answer, nothing more than a meaningless brush off. What does it mean exactly for God to exist ‘outside of time’?

Well what is ‘time’ exactly?

This is something that philosophers, theologians, and scientists have studied and argued for a very long time. To discuss all the various arguments would take far too long, and for the purpose of this argument unnecessary. For the purpose of this argument we will focus on what I believe ‘time’ essentially is at the level of experience; an unbroken sequence of moments linked by cause and effects, or the moment before it.

This means that, for me at least, if God existed outside of all time then it would be impossible for it to create the universe. It could not perform a sequence of events. It could never go from non-creation to creation. This means that for me, the claim that God exists outside of all time fails as an answer. While there are those that may say I simply do not understand the concept, I would love for them to explain it to me in a logical and intelligible manner how God could go from non-creation to creation without at least a moment of time. Even claiming that God created time does not solve this problem in my opinion, because to create time would take a moment of time.

The claim of ‘omnipotence’ does not cover the problem here for me either, as God cannot do something illogical. This means that God cannot break the law of cause and effect. If God is the creator of the universe the universe cannot appear before God creates it. This means that God needed at least a moment of time to create the universe, a moment of time for the cause to have an effect, and at least another moment to go from not being the cause to being the cause. God must exist in some form of time. This time can also then be measured against our standard of time, as he is at the very least 2 sequences of moments.

This means that God either had a beginning, and therefore a creator, or God suffers from an infinite regress problem. Each moment before creation was the result of it actively choosing not to create the universe; and those moments go on ad infinitum. This is one of the reasons I find myself unable to believe that this god concept could be responsible for the creation of the universe. It simply seems illogical that a being that makes choices, and is subject to cause and effect, that has existed forever could have created anything.

5 Responses to God and the Infinite Regress