How good is your evidence for god? 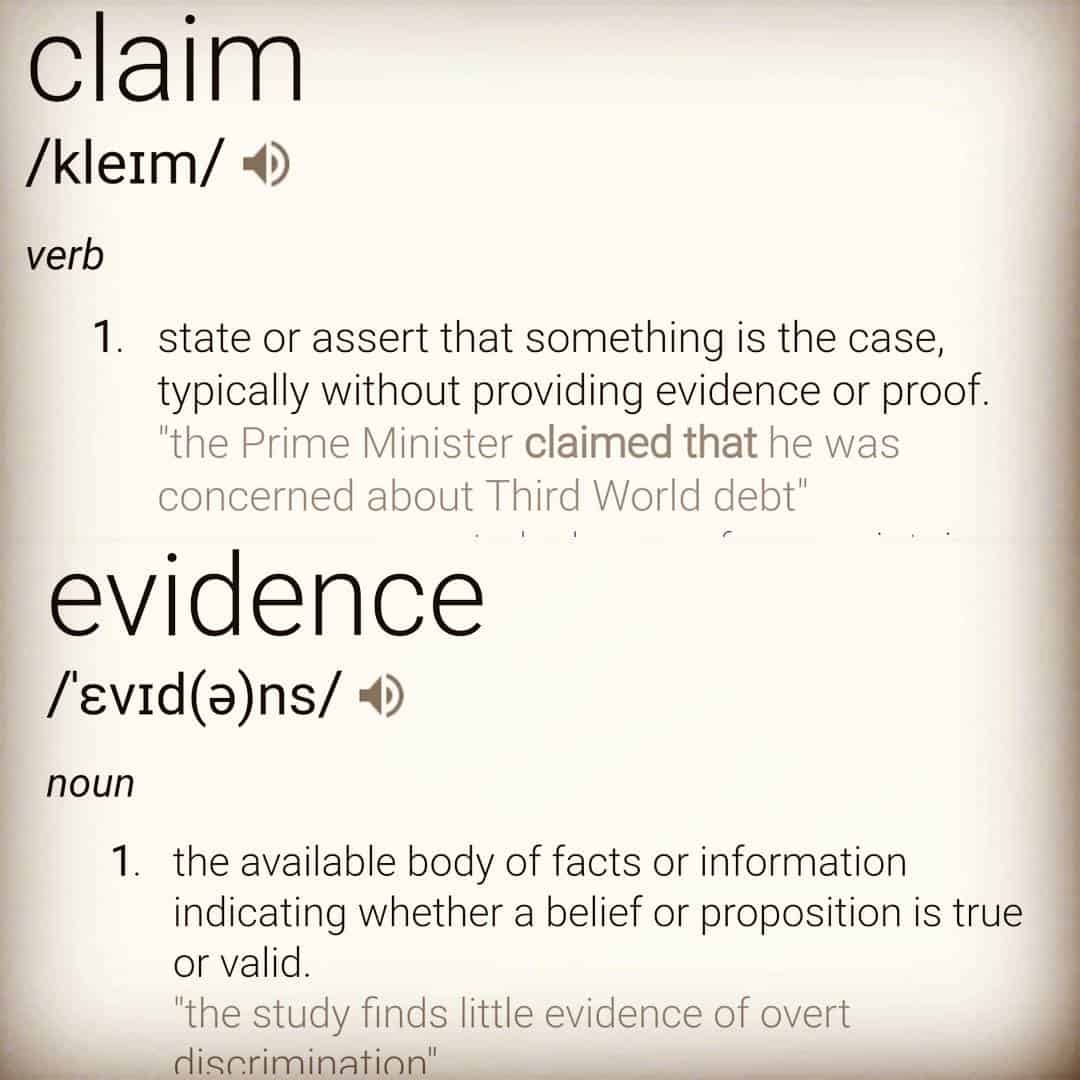 This post is set to examine the average theistic presentation of evidence, whether it is strong, weak, convincing, or even really evidence at all.

We (atheists) often tell theists their ‘evidence’ is ‘not evidence’, and this is often incorrect. Evidence is indicative rather than completely conclusive (even if we do make conclusions off of evidence), so anything that indicates something could be true IS evidence. It doesn’t mean it is strong or convincing though. It also poses an issue when ALL religions have holy books, and ALL of these are evidence for that faith, and NONE seem particularly strong or convincing to anyone who hasn’t been indoctrinated from a young age. In fact, even if you have been indoctrinated into one faith, reading any other religious texts you see full of holes and unconvincing, but rarely is one able to look at one’s own holy text through the same lens.

There are also things that are true that might not be able to be proven. I have a friend born in Romania. Her parents died when she was very young, she raised her sister, and when she went to get a passport to leave the country she had a problem. The records they had for her were erroneous. Not only did they have her being born on the 2nd rather than the 1st, but they had her being born a whole year later than she actually was. There was no way to prove she was otherwise. Legally, she is a year younger than she actually is. We would usually regard this sort of documentation above evidence. We tend to assume it was conclusive, and therefore proof. She has conclusive evidence/proof of something that is not true.

For a less extreme example, consider you could tell me your name and not have any I.D. on you. It doesn’t make it any less true, just less convincing. You might have your blockbuster card. This isn’t legally binding, and they don’t exist anymore, but you would say it was indicative of the truth (evidence). If you had a drivers licence (the pictured kind) on you, we would usually regard this as proof. (Of course, we could argue it is still only evidence if you only have one form of ID as it could be faked, but if we assume you are not trying to cheat me, just tell me your name, the point stands).

So what do we mean when we say ‘that is not evidence’?

I’m unsure if all my fellow atheists are aware of this nuance between proof and evidence, and how anything indicative is actually evidence, even if it is weak and unconvincing, but generally what we want is some credible, testable evidence. Essentially we want something that is totally convincing and will prove your point.

Why do we want such strong evidence?

The short answer is the SIZE OF THE CLAIM.

If I claim it is raining outside, it is not a big claim. You know rain exists. You might know I live in England, where it rains pretty much every day. You might believe me without question, but I could also prove this with pictures and videos and you could check on weather.com or bbc.co.uk/weather.

Now let’s step up my claim. Let’s say I can do a triple back flip. That is quite a skill, right? Sure you know what a back-flip is, and that a triple back-flip would be 3 rotations before landing.

You don’t know me, nor my level of physical prowess. You might want to see me do that, right?

Even if I sent you a video of a triple backflip, you might question that it was me. You might ask me to do it live, and if I gave you an excuse not to be convinced. It MIGHT be true, but you wouldn’t know that. I wouldn’t have fully convinced you, right?

I could give you increasingly more extravagant claims, and at some point, you would suspend your belief and be agnostic (withhold judgement/lack belief I could / couldn’t do these things) to my claims. If I continued increasing these claims to ever more unrealistic ones, you would start to disbelieve (as in believing I could not do these things) especially if I started claiming unnatural things, like I could fly, or could read people’s minds.

When you come to claiming things like gods, especially creator gods that are all-knowing and all-powerful, you need some pretty convincing evidence. The issue we have here is many things are asserted as evidence, that do not qualify as strong evidence. THEY ARE STILL EVIDENCE THOUGH. This is the bit I know we atheists probably need to change the way we present. We are too keen to say “NOT EVIDENCE” instead of “What about this evidence convinced you?”, “Can you not see x issue with this piece of evidence?”

In this article, I hope to demonstrate why certain pieces of evidence provided by theists are considered weak evidence rather than simply saying they are not evidence, and others really do not evidence what they think at all.

So let’s see this ‘Evidence’ then!

Eyewitness testimony is the account a bystander or victim gives in the courtroom, describing what that person observed that occurred during the specific incident under investigation. Ideally this recollection of events is detailed; however, this is not always the case. This recollection is used as evidence to show what happened from a witness’ point of view. Memory recall has been considered a credible source in the past, but has recently come under attack as forensics can now support psychologists in their claim that memories and individual perceptions can be unreliable, manipulated, and biased. Due to this, many countries and states within the US are now attempting to make changes in how eyewitness testimony is presented in court.

Whilst eyewitness accounts may be accepted in some circumstances it is realised they are less than reliable, especially over time. We humans misremember a lot, and are guilty of filling in the blanks.

As such you need your eyewitness accounts to be detailed, well documented, accurate, and have no contrary testimony. Even minor details being off causes doubt.

This is one if the issues with the gospels and other parts of the bible. There are too many inconsistencies.

I can happily excuse the fact that these things were not written down and were passed down word of mouth for hundreds of years. This in turn has ended up with different accounts, but why?

Well, anyone that played ‘Chinese Whispers’ at school (And I am sorry if there is now a PC name for it but I am not aware of it), knows that even 20 people whispering a sentence round a circle makes it get at least a little bit distorted.

Storytelling was one of the main forms of entertainment, so it benefited the storytellers to have and extravogant and exciting storyline. They would embellish on the details to ensure listeners. Minor feats of healing become tails of magically healing blindness.

Let’s not forget that changing the story Jesus from man to god not only was good for the story tellers, but also for the faith they were trying to spread.

We quite often hear ‘I just feel it is true’ as if that is some sort of creidble evidence to present. I personally find this one of the weakest theistic arguments, because we can feel any way about any thing, it doesn’t make it true.

How many of us have woken up to partners who are mad at us because they had a dream where we did something bad to them?

This alone should tell you how weak ‘feelings’ are as evidence.

However, there is more to show feelings, especially in this matter, are not to be trusted.

As we evolved, assigning agency became an evolutionary survival trait. Rustling in the bush? Is it a lion? Best RUN! Sure it might have been the wind most of the time, but those paranoid it was something more and ran away had a much higher chance of survival than those that were not and hung around.

Therefore the trait of assigning agency helped us survive. This lead to paranoia and superstition, and indeed theistic beliefs.
‘Why isn’t our crop growing?’
‘God is mad!’

From both angles, we can see that feelings are not really strong evidence for anything.

A miracle is an event not explicable by natural or scientific laws.[2] Such an event may be attributed to a supernatural being (especially a deity), magic, a miracle worker, a saint, or a religious leader.

Informally, the word miracle is often used to characterise any beneficial event that is statistically unlikely but not contrary to the laws of nature, such as surviving a natural disaster, or simply a “wonderful” occurrence, regardless of likelihood. Some coincidences may be seen as miracles.[3]

Miracles are an odd one. For one, there doesn’t seem to be any credible records of something that could not be explained by natural circumstances, but if we lean towards the informal definition of something statistically unlikely, we still have problems with these miracles. If they only ever happened to one faith they might be more of a valid form of evidence, but they happen to every faith and to the faithless. That is to say, there are spontaneous recoveries that have happened to people who have been told they are terminal regardless of their faith, or lack of it.

There are never any direct instant cures, regrown limbs, or anything that could ONLY be done by a god, especially not caught on camera. Like all these alien visitations people have had, there is NOTHING to corroborate their story.

There is nothing wrong with sharing an anecdote. It is one of the way we communicate. It is essentially just a form of eye witness testimony, and usually 1st party, unless sharing someone else’s anecdote.

Frankly, it is again weak, unless backed up with some form of more credible evidence, like a video. I won’t waste your time going over an example already provided.

When I speak of an assertion, I speak specifically of a claim of something that is evidence for something else.

We have heard things like ‘trees’ ‘nature’ ‘the world’ ‘humans’ are all evidence for a god. It often ends in a circular argument or argument from incredulity along the lines of ‘it’s self-evident’ or ‘how else could it get there’.

This sort of reasoning is nothing if not silly. Even if these things were clearly eveidence for a god, they are still not evidence for a particular deity. This particular brand of ‘evidence’ definitly qualifies as ‘not evidence’ even if most of the rest we have mentioned do.

There are some logical arguments, like the Kalam, but this relies on gaps in knowledge, presupposition, induction, and frankly isn’t convincing.

Even if convinced that arguments like the Kalam require that ‘Prime Mover’ it still says nothing for which deity. Folks just like to insert their particular deity into that gap.

We’ve discussed at length on this site why these arguments don’t really work, so if you are interested, check these links:

There doesn’t seem to be much strong or convincing evidence for any deity.

There is evidence though, and we atheists should be more mindful, asking questions about what they found convincing about the evidence and the like. Hopefully, this will encourage a good conversation, and we all might learn something.