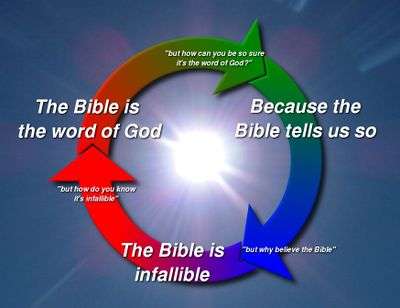 “The Bible is inerrant!” is something quite commonly said in debate. It’s part of the circular reasoning: “The Bible is the word of God, because it tells us so, God is perfect, therefore the Bible is infallible.”

We have a number of articles that address things like:

This article is not going to address any of those (although may reference them), and instead will look at any of the claims from a scientific and historical point of view to see if we can find any supporting evidence.

Obviously we can imagine that we will get answers like:

And many other excuses. It is so common to hear people claim that the Bible is scientifically accurate that I felt it worth writing this article series. I’ll even provide some links to sources. There are multiple sites and research papers that will back these up rather than the few I give you. Some of the links I provide will be from Wikipedia as they are a simplified version of articles for ease, with references to the studies used in them if you are more scientifically literate.

You will only find a few sites like ICR and AIG if all you are searching for is confirmation bias.

One of the things I find puzzling about those who take the Biblical creation story literally, is that there is so much evidence to the contrary.

Ignoring the difference between Gen 1 & 2, as these could be said to be looking at things in a different way let us examine Gen 1:

Initial issues with the order of creation

I’ve given examples above of how old things are, but just to recap and add to:

Yes, there is the common excuse that a “godly day” is not the same as a human or “solar” day, but this is both an excuse and even if there was millions of years between each of those days, they are still in the wrong order.

How old the earth is

Not all theists, or even Christians deny the science on this. however YEC’s (Young Earth Creationists) believe that God created the world 6000 years ago.

Frankly this one doesn’t even warrant any more time.

Descended from Adam and Eve, and their 3 sons

A common excuse here is, “they went on to have other children, they just were not important enough to mention in detail”

Still, we are left by a huge amount of incest… not to mention the Biblical flood that allegedly happened a few thousand years ago. This means we would all then be descended from Noah’s family.

“If we were made from dust, why is their still dust?”

I jest of course, but we hear the fallacious and common creationist misconception about “Why are there still monkeys” all the time.

“If there is such a thing as Google, why do people ask such stupid questions?”

Another amusing point here is theist like to say “you think all life came from mud” – a really terrible understanding of abiogenesis… the irony being that’s what they think their God did too.

The Shape Of the Earth

There are many verses in the Bible that seem to dictate the shape and position of the earth and also contradict each other:

1 Chronicles 16:30 Tremble before him, all the earth! The world is firmly established; it cannot be moved.

1 Samuel 2:8 He raises the poor from the dust and lifts the needy from the ash heap; he seats them with princes and has them inherit a throne of honour. “For the foundations of the earth are the LORD’s; on them he has set the world.

Isaiah 11:12 He will raise a banner for the nations and gather the exiles of Israel; he will assemble the scattered people of Judah from the four quarters of the earth.

Isaiah 40:22 He sits enthroned above the circle of the earth, and its people are like grasshoppers. He stretches out the heavens like a canopy, and spreads them out like a tent to live in.

Job 26:7 He spreads out the northern skies over empty space; he suspends the earth over nothing.

Job 26:10 He marks out the horizon on the face of the waters for a boundary between light and darkness.

Job 28:24 for he views the ends of the earth and sees everything under the heavens.

Job 37:3 He unleashes his lightning beneath the whole heaven and sends it to the ends of the earth.

Job 37:18 can you join him in spreading out the skies, hard as a mirror of cast bronze?

Matthew 4:8 Again, the devil took him to a very high mountain and showed him all the kingdoms of the world and their splendor.

Proverbs 8:27 I was there when he set the heavens in place, when he marked out the horizon on the face of the deep,

Psalm 75:3 When the earth and all its people quake, it is I who hold its pillars firm.

Psalm 104:5 He set the earth on its foundations; it can never be moved.

Revelation 7:1 After this I saw four angels standing at the four corners of the earth, holding back the four winds of the earth to prevent any wind from blowing on the land or on the sea or on any tree.

The above says many strange things..

We haven’t even begun to scratch the surface of the Bible’s errors. We have only just began with a few example from Genesis, mostly around creation and the dawn of man.

Over the next few months hopefully I will be able to expand on these, providing more examples – but please feel free to submit any errors or corrections to admin@answers-in-reason.com.

If the Bible is inerrant, why are there errors?
If the Bible has had a translation error, how do you know the parts you like are also not translated?
If one part is a “metaphor” how do you know other parts are not?
Why are you conflating your feelings and beliefs with credible evidence and knowledge?