Home / Vaccinations / Why Anti-Vaxxers are Right!

Why Anti-Vaxxers are Right!

The less one is educated or the lower one’s intelligence is, the more easily one could be swayed by emotions and terrified by facts.

This fear of the facts creates an aversion to them and strengthens belief in the factoids they are comfortable with.

Women are often considered to be more emotional than men, and as such women are (apparently) more likely than men to be anti-vax*.

“When it comes to making decisions about vaccines, women are likelier than men to place trust in the wrong places.” – http://www.slate.com/articles/double_x/doublex/2015/02/women_and_vaccine_resistance_mothers_make_health_care_decisions_for_their.html

This is not limited to women of course, I previously mentioned how my emotions were played upon in my article about “Trust”. Perhaps the reason for it seeming like women being a bigger player in the anti-vax world is due to parenting. It is often just the mother at home with the child, especially after birth during maternity leave.  This in turn leaves the mother to make decisions about the child’s immunisation. A quick google search is enough to scare anyone with misinformation.

The decision to be an anti-vaxxer (creationist, flat earther, or any kind of conspiracy theorist) is an emotional one.

As such it is unlikely to convince an anti-vaxxer they are wrong, especially not with things like “facts” and “evidence”.

You either agree with them and you are both wrong, or you provide them actual evidence and get called a “Pharma Shill” whilst they dig their heels in.

Even if you move past the evidence of vaccinations being safe and go on to examine how the average doctor lives; with their 60+ hour weeks and wages that can range from;  $50k up to $400k for the top of the range specialist/consultant in the US, or UK doctors who have an even lower salary of £37k-£80k.

And “Dr” Joseph Mercola of Mercola.com happens to live in a giant mansion that he has got by peddling pseudoscientific nonsense you will not get anywhere. Anti-vaxxers are so stuck in their opinions they believe Mercola deserves their money.

Dropping the bombshell that he is frequently given warnings about illegal claims on his site only further goes to strengthen how you are a “pharma shill” and “part of the conspiracy”.

So what can you do to convince Anti-Vaxxers they are wrong?

Didn’t you read the title of the article? Anti-Vaxxers are right. There is nothing you can do to convince them otherwise.

The best option we have is properly educating the young. We need greater scientific literacy around the world. We need to teach people to make decisions based on evidence and not what they “feel” is right.

It is at this point they often falter  and double their efforts to convince people. If they can get others to believe, maybe they will again too.

Is it worth debating Anti-Vaxxers? 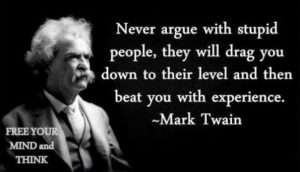 As with any group that seems to be devoid of reality, there is little point in debating them if you expect a positive result. The benefit could be to someone else who may be curious or on the fence. This is why it is important to remain calm, eloquent, and avoid both ad homniem and insult. If you can remain calm whilst making them splutter and insult you only go further to endear other readers to you.

Unfortunately debating Anti-vaxxers, like debating creationists, can be very frustrating. It is hard to remain calm when all that is going round your head is: “You’re a delusional idiot!”