Home / Science / The Only Thing Cured By Homeopathy Is Prosperity

The Only Thing Cured By Homeopathy Is Prosperity 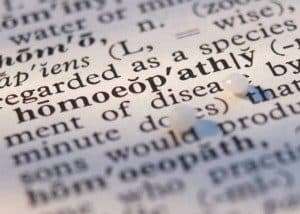 The first thing that we must do when addressing this topic is to explain what Homeopathy actually is.

A common misconception about Homeopathy is that it is synonymous with Herbalism and natural remedies, but this couldn’t be further from the case.

Herbalism is the use of naturally occurring plants in treatment for diseases, disorders, and conditions. This, in cases, has been brought into the fold of modern medicine. Take Aspirin for example, which is derived from the bark of a Willow tree.

However, Homeopathy has no necessity for it’s ‘treatments’ to be ‘natural’ in nature. As an example, there is a Homeopathic ‘remedy’ which has it’s so called active ingredient being a part of the Berlin Wall. Now, I could be mistaken, but I feel fairly certain in my ability to claim that the Berlin Wall was NOT naturally occurring.

So. What IS Homeopathy?

Homeopathy is taking infinitesimally small amounts of an ingredient, and applying that to a sugar pill to treat conditions.

There are three basic ‘laws’ of Homeopathy, which they claim make their treatments effective, and I will outline these below. 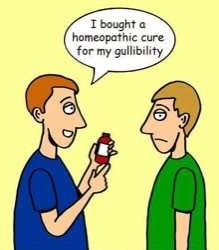 The Law Of Similars is the claim that a symptom can be cured by the taking of a substance which causes the same symptom. For example, if a person is suffering from abdominal pains due to stomach ulcers, the Law Of Similars would state that this can be treated by giving the patient a substance which causes indigestion. The thinking (and I use the term loosely) is that the body will learn how to deal with the symptom on its own, and therefore be able to remedy itself, even if it is a completely different cause.

A common argument presented by Homeopaths is that it is the same principle as vaccination, so if modern medicine accepts the basis for vaccination, it therefore must accept that it works for Homeopathy. Without going into the specific fallacies in this statement by name, it is more than obvious to anybody with a rudimentary understanding of the immune system as to why this is not the case.

I’m not going to go into a detailed description here of how vaccines work (I’m sure that our readership understands this well enough, and a quick Google search will provide FAR better explanations than I can sensibly include here.)

But I feel that it is obvious to anybody who puts any real thought into it that the more causes for a symptom you have, the worse that symptom will become. If I have a headache, and then do four more things which cause headaches, my pain level certainly isn’t going to reduce. 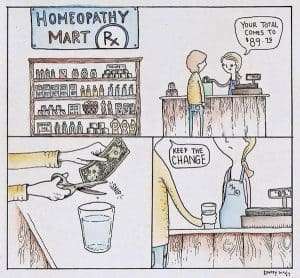 The Law Of Infinitesimals is the idea that an active ingredient gets stronger, the less of it there is. Which of course we all know to be true. If I put only one coffee granule in my cup of boiling water, I will obviously end up with a much stronger cup of coffee than if I’d used a whole spoonful.

Of course this idea is absolutely absurd, and I personally cannot think of a single example where this is even close to being true.

But the lengths of this absurdity when applied in Homeopathy surpass even the ridiculous example of my morning coffee.

When one sees a Homeopathic ‘remedy’ for sale, you may notice that it includes a number, followed by the letter C.

This C stands for Centesimal.

So for 1C we have 1% ‘active’ ingredient

But the problem doesn’t end there. Homeopathic ‘remedies’ are often sold at 6C, or even 30C. So to carry on our above percentages. 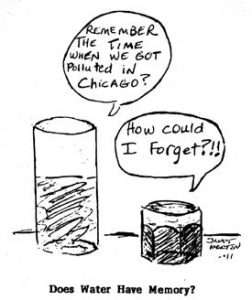 The Law Of Sercussion is the strangest of them all (which considering the other 2 laws, is really saying something.) Sercussion is the idea that a solution can be ‘potentised’ by causing vibration between each act of dilution. This is achieved by tapping the container which is holding the solution against a ‘firm but giving’ surface. This is commonly leather, and also commonly, and worryingly, a bible.

The ‘potentisation’ comes from the idea that this vibration gives the water molecules a memory of the ‘active’ ingredient, and therefore is able to have the same affect even after the ingredient itself is gone.

So, just to summarise this quickly.

If I have a glass of water with something in it, hit it with a bible, then clear out all traces of the original thing, the water will remember and be able to emulate it. Because science, apparently.

How exactly this memory is supposed to work is beyond me. There is absolutely no mechanism which would give water the ability to remember something, no matter how many time you thump it with a Holy Book.

The following are some ballpark figures, outlining how likely you are to actually find some of the original ‘active ingredient’ in your Homeopathy 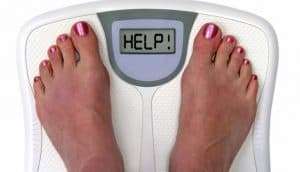 1C = 1:100 chance. Or the equivalent chance of picking at random the first and second place horses in a 15 horse race.

2C = 1:10,000. Or the equivalent chance of being on a train car with 41 people, and randomly having to share a compartment with the three others in the group you can’t stand.

As well as all of the previous issues that have been raised and discussed, we also have a significant problem with how these ‘remedies’ are sometimes produced.

The largest producer of homeopathic ‘medicine’ in the U.K (who I will not name here, due to our absurd Libel Laws, and the litigious nature of such companies) was investigated by the F.D.A due to them selling their product in the U.S.A. The results can be found here in full, but I shall provide a summary below.

The results of this investigation are damning, to say the least.

The method of production used in this factory is to have a conveyor belt of normal sugar pills, each stored in a glass vial. As the vial reaches the correct part of the process, a drop of the homeopathic solution is dripped into the top of the vial, and it then goes through into the final packaging process.

So we have one obvious issue here. In a vial of a few pills, only the top one in the container is actually getting any direct contact with the solution in question. Even with a large drop being applied, we can fairly safely assume that the top pills get quite wet, the middle pills get a bit wet, and those at the bottom almost certainly remain completely dry.

Furthermore, the F.D.A. found that 1/6 of the vials didn’t even get any of the solution whatsoever. The drop which was meant for the vial missed completely, or dripped down the outside of the vial, missing the sugar pills contained within.

Many thanks to Markus Kruger for his help in finding the statistics for me.