Home / Science / The Problem with Pseudoscience 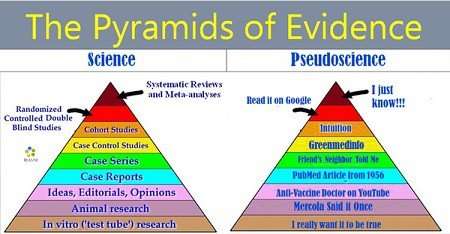 So, I try not to rip on my students in general. I especially try to avoid poking fun at them online. But occasion one does something so monumentally stupid that I have to talk about it (don’t worry, I don’t share my postings with them, and no names or places will be mentioned). In this case, there was an event from my public speaking class that I think worthy of discussion. I had my students give an hour long presentation (actually 45 minutes). At the beginning of the term, I told them to pick any subject they were passionate about. The idea was to teach them the skills needed for an effective presentation after all, not to make the assignment hurt even more by forcing them to research something they didn’t care anything about. Now, one student asked if he could do a presentation on “higher dimensions” of existence. I wasn’t entirely sure where he was going with it, but I thought, “how bad could it be?” Again, I’m grading the presentation, not the pet interests of the students. If he can generate a talk, no problem. Well, problem. But it has proven instructive for me and all the rest of the students in the class.

Fake It ‘Till You Make It, It’s a Thing

Things were as bad as you could possibly imagine. There wasn’t bloodshed. That’s the only limit to the carnage. On the night of the presentation, he begins talking about the normal spacial dimensions we all know and love… and getting even that wrong. He starts off by saying a plane is a one dimensional object, that we all live in two dimensions, and that we become spiritual, and “fully aware” when we reach the third and fourth dimensions of existence. I asked him for his source on the information, and he literally tells me “some guy on the Internet.” He then ignores my look of absolute horror and proceeds to tell me, still with a straight face, that there are 7 universal laws connected to 7 known dimensions of reality. I simply could not make this kind of malarkey up. The other 6 students in the class look at me to see what I, their teacher (and physicist), is going to do about this obvious train wreck. The only person that didn’t seem to be aware this was a locomotive disaster was the conductor himself. As appalled as I was, I continued to listen. I wanted to just see how deep we were going into this rabbit hole. If he was truly aware that he’d lost his entire audience, peers and professor alike, within his first 7 minutes, he did a wonderful job of hiding it.
So, here’s why I find the whole thing instructive. This is pseudoscience. It’s obvious to me and everyone else in the room that it’s pseudoscience. What makes it special is that the polished veneer has been stripped away. It’s so bad, that it’s crap even to the most casual observer. And with that, it demonstrates the basic formula used by all pseudo-scientists.

Have you ever noticed how when someone wants to believe something that goes against mainstream thinking that they always want to claim some sort of conspiracy? Sorry, but none of the people I know are that organized … or dishonest. Scientists and engineers included. Religious people can’t bury a new religion that works better than theirs. They can barely deal with holding their own against competing religions and atheism (or just materialism) these days. Car manufacturers would be happy to put oil companies out of business (and take their market share) if they could make a car that ran on water. And every scientist/engineer I know would dearly LOVE to be able to build a perpetual motion machine. Get over yourself. No one is out to get you. I sincerely doubt they’ve even noticed you.

Leveraging (and Corrupting) the Things You Hate

The next trick is to start with established science. You know, like saying the first 3 of your 7 dimensions of reality begin with the ones we already know, and then building on that. Another example might be homeopathy, where they start off with viable drugs but then argue that they can be diluted down to concentrations literally comparable to the proverbial drop in the ocean – and just think of all that 100 million year old dinosaur pee that you’re drinking every day – because, you know, the water “remembers.”

Make Everyone Else Work Harder Than You

When you ask a pseudoscience true believer how they know all the things they’re touting, the answer is often some variant of “why not?” “Who’s to say that the universe isn’t a bigger place than science realizes?” “Who’s to say this isn’t exactly the way things work?” “Can you prove me wrong?” Learn to recognize this argument in all it’s forms. It’s not logically feasible to prove a negative. I can’t even conclusively prove that the Tooth Fairy doesn’t exist, but that’s not the point. One can prove something does exist. You can show me the Tooth Fairy, have her say “hi” and give me a couple bucks for a molar, now I have evidence. It’s not my job to prove your pet theory WRONG. That’s the intellectual equivalent of turning me into Sisyphus and asking me to push a rock up a hill forever. No, it’s your job to probe your pet theory, and then provide the evidence to prove it RIGHT. Einstein had a really odd theory. Most didn’t believe it could possibly be correct. He then spent the next 20 years or so convincing people. If he wanted to see it done, it was his job to do it. And that was a Nobel Prize winning scientist.

Letting Your Brains Leak Out

When disagreeing with them, pseudo-scientist will often give you disapproving looks and tell you that you just aren’t open-minded enough. As the saying goes, “keep your mind open, but not so open that your brains fall out.”* Not everything imagined is real. That goes for unicorns, ancient Greek gods, flat home planets, or mind altering drugs in jet contrails. I mean, how concentrated does that stuff have to be to fall 35,000 feet out of the sky, spread all across the ground, and still have a measurable impact from the bit you actually breathe in? Maybe it’s homeopathy again.

We may not always like experts, especially when they tell us things we don’t want to hear… like “eat more kale and less sausage.” If we’re reasonable and mature, we even understand that they can occasionally be wrong in their assessments, but still mean well and have likely done their due diligence. We certainly accept that they’ve probably had some training and put some effort into being good at what they do. I remember talking to a “ghost hunter” in a panel and having her tell me that her biggest problem was a lack of respect from the scientific community. She could do so much, if only scientists would actually listen to her. My response was not the standard “that’s because you’re a kook” or “you’re untrained.” No, I took a different tack. I told her that if she had evidence of anything paranormal that I would approach the scientific community on her behalf. I would introduce her to researchers. I would help her write the papers. And then I gave her and her friends my card. That was 6 years ago. I’m still waiting. I still see her every year at the same convention. I try to walk up and make sure she still knows how to get ahold of me when she finds a real haunted house, or whatever. She usually avoids eye contact and goes the other way. When I am able to catch up to her, she just says she’s still looking for “a really good case” for me to study.

So what is “THE” problem with pseudoscience? It always starts with a predetermined notion, and ignores, nay FIGHTS, any and all evidence to the contrary. That’s not being open-minded. That’s pushing a pet agenda for something you’ve already decided to believe. And usually someone is profiting from it. Even as they condemn all the money the nasty old establishment is making.
#AskDrBen
*http://quoteinvestigator.com/2014/04/13/open-mind/
More articles from Dr. Ben to come in the near future.

4 Responses to The Problem with Pseudoscience